Mexicali Mayor raises his voice before the Supreme Court 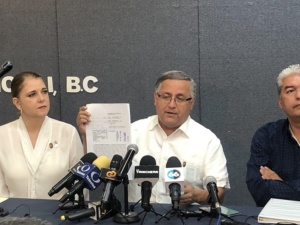 At a press conference, the Mayor of Mexicali, Gustavo Sánchez Vázquez, reported about the issues discussed during his visit to Mexico City, before federal magistrates at the Supreme Court of Justice of the Nation.

He pointed out the officialization of the Constitutional Controversy presented by the Mexicali City Council, in relation to the reform carried out by the State Assembly of Baja California, in which it was decided to extend the governorship period from 2 to 5 years, to convene elections in 2024, and not in 2021, as established.

The mayor, stressed his position to preserve the rule of law, and said he is confident that the Federal Court will stop such reform, since, according to Sánchez Vázquez, the legislative branch of BC acted without due process, without consulting the five city councils beforehand, and prior to the session where said constitutional action was enacted.

Likewise, he said that he did this as part of his responsibility as mayor, and not based on the interests of political parties, clarifying that each one of them, including the National Action party, which requires an adjustment in their leadership. He also stated that he does not fear future reprisals against him, which could derive from his legal demonstration in court.

The legal action undertaken by the municipal government is based on the constitutional article 14 of Baja California, which indicates the procedure to consult the councils before executing an initiative from the legislative branch.