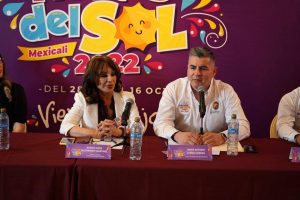 At a press conference, the Municipal President Norma Bustamante joined by the Director of the FEX Events and Exhibitions Center Omar Landa announced the 46th Edition of the “Fiestas del Sol” will take place from September 28 to October 16.

The mayor stressed that in addition to the traditional attractions offered by the “Fiestas del Sol”, the FEX team headed by Omar Landa is planning new areas so that visitors can interact through their social networks.

Norma Bustamante highlighted that the “Collective Pavilion” will be included for the first time, to support entrepreneurs with accessible stands so that they can promote their products.

On the other hand, the Mayor stated that this broadcast will have an extensive artistic billboard for the enjoyment of Cachanilla families, she also added that spaces will be opened for local talent.

For his part, Omar Landa announced the first confirmed artists to the Isla de las Estrellas, which are: Alicia Villarreal, Ana Bárbara, Roberto Tapia, and Eliseo Robles, and the Kabah group.

In addition, she mentioned that in this edition one of the purposes is to help social causes, therefore, the invited artists will develop events before their presentation to benefit institutions.

The Director of the FEX commented that for the first time an artist with a great career will be presenting daily, guaranteeing the people of Mexicali a quality event.

Similarly, he explained that a series of events will be held before the start of the festivities, such as the “Reina Fiestas del Sol” contest, a parade, a show car, as well as the custom characters’ races, athletics, and a bike ride.