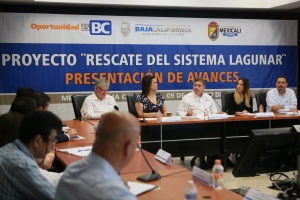 It includes the Mexico, Xochimilco and Campestre lagoons in a multiyear program

MEXICALI, BC- Tuesday, August 9th, 2016.- The Governor Francisco Vega de Lamadrid , led the presentation of the progress of one of the most important regeneration projects for Mexicali, as is the Master Plan for the Lagoon System Rescue Plan, which includes a multiyear estimated investment of 372 million pesos (MDP), which will be provided between the three levels of government and international organizations, with the aim of transforming Mexico, Campestre , Xochimilco and surrounding lagoons areas into recreational and suitable spaces to practice sports.

The Governor said that with an initial investment of 22 million pesos, and various measures have been made to improve infrastructure and transform this area into a place of recreation, but it will also allow the health conditions of the lakes inhabitants in surrounding areas to be optimal.

Meanwhile, the Secretary of Infrastructure and Urban Development of the State (Sidue), Manuel Guevara Morales, mentioned that he has an approximate area of 114 hectares and consists of the Xochimilco, Mexico and Campestre lagoons. The State Government through the State Water Commission (CEA) has begun replacement work of the First Gate Control in Laguna Mexico with a total of 9.81 million pesos ( MDP) 2015 Metropolitan Fund.

To this day, a “hydrological, bathymetric study and topographic survey of Mexicali Lagoon System has been completed,” prepared through an agreement by SIDUE-UABC with a total of 1.16 million pesos. The Municipal Planning Institute (IMIP) develops the “Draft Master Urban-Economic Lagoon System of Mexicali Development Plan”, with a contribution of 1.6 MDP FIDEM fund by the Economic Development Council of Mexicali (CDEM). The lagoon system is part of the RAMSAR site “Wetland System Remnants of the Colorado River Delta”, by which is considered a conservation area of ​​lakes and wetlands of international importance.