Breaking News
Home / BUSINESS / MEXICALI IS A REFERENCE TO THE GROWTH OF THE LOCAL INDUSTRY: LEG. NÚÑEZ LOZANO

MEXICALI IS A REFERENCE TO THE GROWTH OF THE LOCAL INDUSTRY: LEG. NÚÑEZ LOZANO 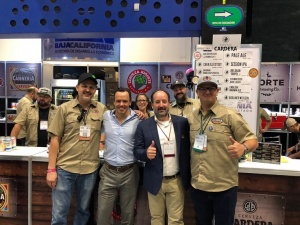 Mexicali, Baja California.- The Representative Jorge Eugenio Núñez expressed his gratitude for having been invited to inaugurate the Mexico Beer Expo, the most important in Latin America, putting Mexicali as a benchmark for the growth of the local industry.

Mexico Beer Expo was held at the World Trade Center in Mexico City, considered the most complete beer in Latin America where suppliers meet and the best range of styles and brands of craft beer along 4800 square meters of exhibition areas.

The invitation responds to the fact that the Baja Californian Assemblymember Jorge Eugenio Núñez, then member of the XXI City Council of Mexicali (2013-2016), was the one who worked with several craft brewers to modify the Regulation of Municipal Alcohols, coming with the first regulation in the city that gives certainty to the manufacture, sale, and distribution of craft beer.

The growth is such, says the assembly member from the Baja California Party (PBC), which estimates that by the end of 2018 this local industry will be producing a little over 200 million pesos in sales, as well as investments of affiliated breweries of approximately 15 million pesos, which generates an economic dynamic that benefits our city and state.

He stressed that in Mexico this sector has an accelerated rate of growth, because of the 14 new brewers that were in 2010, continued with a gradual growth to reach 230 in 2017, and currently in Mexico, it already has a total of 630 breweries.

This indicates the legislator assured us, that every day our society is more aware of the importance of supporting, promoting and consuming local products, as an effective way to improve our economy.

In addition, he added, the impact that this Mexican industry is having at an international level is very large in countries such as the United States and Canada, to mention some are our main investment destinations; however, regions of Central America, Asia, Africa, and Oceania also receive our product, thus increasing our production destined for export and positioning the name of Mexico in the palates of the world.

The legislator had the opportunity to exchange words with the Governor of the State of Montana, in the United States, Lt. Mike Cooney, during the celebration of this inauguration.

The Baja California Legislator Núñez Lozano expressed his total commitment to continue promoting this beer industry, but also he will continue to support all local commerce or industry, because, he assured, without doubt, we have visionaries, leaders, entrepreneurs who know how to do things well and have the ability to develop their ideas to spearhead nationally and internationally.