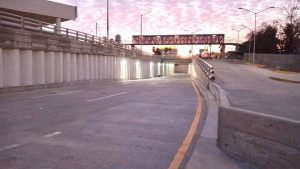 Starting yesterday, a new route will be open to enter Calexico from West Port of Entry that will give travelers a new experience when crossing.

The Ministry of Communications and Transportation through the SCT Baja California Center informed that as of 8 in the morning on April 1st, the modernization project at the Mexican side will begin to operate.

This is part of the infrastructure changes that are part of the new downtown port and further adjustments are expected when the construction of the new pedestrian gate in Calexico begins.

The work had cost 148 million pesos. Three traffic lanes with 446 meters in length, a railway crossing bridge, a vehicular bridge, and a pedestrian crossing were built.

Likewise, complementary works were made such as the repair of the drainage system located in the area of ​​the downtown area of the city, paving with stamped asphalt concrete of Melgar avenue, and improvement of the bearing surface of Zorrilla alley and Colón avenue. The SENTRI lane and the medical line will continue to operate through the access in Río Nuevo and the standard crossings can be made through the traditional Colón avenue or the vehicular bridge.

Through the Mexicali- Calexico west checkpoint, the crossing of 14,500 vehicles per day is registered, as well as 15,000 people who do it in a pedestrian way.

“In 2017 we began the process to build the bridges of the central gatehouse and thus have an entrance and exit to the country worthy of Mexicali and its inhabitants. Since that date, many hours of work have been invested by many people to make this work a reality. Good for the Federal Government that was in charge of this work carried out with Mexican money” said former mayor Gustavo Sanchez Vazquez on Facebook.

This work is the result of coordination between the three levels of government where it was sought to prioritize the safety of users and promote the economic and social development of the capital of Baja California.