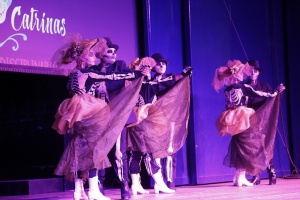 Mexicali, Baja California.- In a multicultural combination, celebrating the Day of the Dead and Halloween, the diverse public, including representatives of the Chinese community in Mexicali, the Cachanillas enjoyed the closing of the 17th October Festival.

To the rhythm of the salsa, cumbia, merengue and rumba, the attendees already installed in the Plaza de las Artes at Ceart, began a marathon evening, which included contemporary dance, ballet, hip hop, classical and modern music with the Rio Nuevo orchestras and The Sentinel, besides theater and folkloric dance.

After public recognition of the young creators of the attractive giant catrinas that caused a furor among the attendees, the general director of the Institute of Culture (ICBC), Manuel Felipe Bejarano Giacomán, on behalf of the State Governor, Francisco “Kiko” Vega of the Madrid, thanked the respectable attendance of all the activities of the festival.

More than 220 events were distributed in various locations in Baja California, including the Center for Social Readaptation (Cereso), El Hongo, where 170 artists and local, regional, national and international collectives offered shows, concerts and exhibitions at no cost, some for the whole family.

In this effort of the State Government, among the most popular were the staging “Airplanes (Aeroplanos)”, starring Ignacio López Tarso and Manuel Ojeda, Celso Piña, the dance and music of India Samandar Khan Manganiar Rajasthani, The Three Sad Tigers, the gala in homage to Manuel Torres, the 39th Anniversary of the Ballet Folklorico Ehécatl, as well as the theater for children which, Sunday to Sunday, managed to bring together entire families in the State Theater.

Bejarano Giacomán, reiterated the gratitude to the Baja California public, of which 50 thousand attended the different events during the 31 days of the Festival throughout the State.

During the closing in Mexicali, those present admired the audiovisual projections of GAV Projection and the proposal on Meta-theater group scene with “La muerte en el cine mexicano”.

For more information on this and other activities, as well as the events of the Institute of Culture of Baja California, visit the website: http://www.icbc.gob.mx and the social networks Facebook/Cultura BC.