Mexicali Downtown Renovation Continues with the Modernization of Avenida Juarez 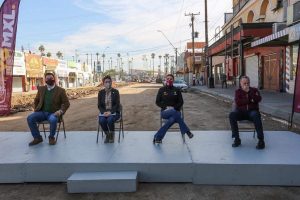 With an investment of 39.1 million pesos, through SIDURT, Avenida Juárez, one of the fundamental roads of the Historic Center, will be modernized, a project that contemplates its integral reconstruction, in a length of 400 ml, starting from the German Bridge to conclude at the intersection with Bulevar Adolfo Lopez Mateos.

The Mayor explained that, regarding the “La Chinesca” Economic Regeneration District, there are substantial advances with the relocation of the Chinese Pagoda and the remodeling of the roundabout where it is now located, in the vicinity of this area.

In addition, thanks to the renovation of Avenida Juárez, this area will be given another face, along with the creation of the Museum of Chinese Gastronomy, a construction that will undoubtedly add value to the infrastructure works, in this way consolidate the Historic Center.

Marina del Pilar, thanked the State Government headed by Jaime Bonilla Valdez, since Mexicali has received the support with resources so that these works can become a reality, in the same way to the merchants of the Historic Center, who from the electoral campaign made their concerns known and have worked hand in hand to advance this great project.

The Mayor indicated that this work is in addition to the previous ones already consolidated, such as the remodeling of the cathedral area, also known as “Mexicali Rose”, as well as the creation of a tourist bus route that will give visitors a tour of historical sites.

In this sense, she mentioned that soon, the Federal Government will also complete the work to modernize the port of entry, which will give Mexicali a dignified entrance, but which in the end will also benefit the entire first cadre.

The Mayor thanked the Secretary for State Infrastructure, Karen Postlethwaithe;  the Secretary of Water, Salomón Faz Apodaca, as well as the merchants of the Historic Center and representatives of the Chinese community.