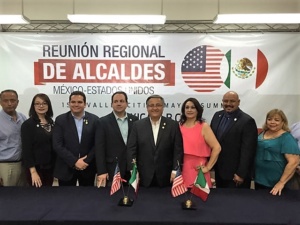 It was a Tuesday morning at the Imperial County Board of Supervisors meeting on November 1, 2016, a special guest was going to make an appearance before the board to introduce himself as the Mayor-Elect of Mexicali.

That day, Gustavo Sanchez Vazquez set the tone of his administration in regards to his binational agenda with the United States. For the first time in many years, Mexicali took an aggressive approach in fostering binational relationships with municipal, county and legislative governments to open lines of communication and friendship.

“It was truly an honor to have Gustavo Sanchez at our meeting. We don’t often see a Mexicali Mayor come visit and want to work with us,” said Jack Terrazas, former county Supervisor, and chairman of the board when Sanchez visited.

Weeks after Sanchez became Mayor he met with then-Calexico Mayor Armando ”Mandy”  Real and agreed to reaffirm their sister cities agreement. As border cities with strong economic and family ties, it was a natural step for both cities to reignite a relationship that was lost in previous years.

Former Calexico Mayor Real, took interest in the binational efforts as well during his term in the city council. In 2014, Real was appointed by the council as the liaison with the city of Mexicali. Real met with the department of tourism of Baja California, the Mexicali Medical Cluster, and CDEM Mexicali as part of his official meetings at the beginning of his term as councilman. Sanchez Vazquez and Real’s mayorships coincided in 2017 and agreed to work together. Both mayors signed the reaffirmation of Calexico and Mexicali marking a new beginning in their relationship.

“I worked with Gustavo Sanchez signing this reaffirmation of sister cities but if this is going to continue, they both need to make a commitment to meet on a monthly basis and each council have a liaison. There needs to be more effort put in, especially in Calexico’s side,” Former Calexico Mayor Real said.

Both cities hosted a binational concert next to the border fence. The concert in ‪Calexico took place on Heber and First Street and in Mexicali at Heroes de Chapultepec Park. It also served as a celebration of the anniversary of each city.

Mayor Sanchez said Mexicali coexists in many things with Imperial Valley and Arizona in issues like tourism, environment, public safety, and the economy.

“That’s why I knew from the very beginning that we needed to work hand-in-hand with the Imperial Valley,” Mayor Sanchez said.

Months later, Sanchez invited the mayors of Imperial Valley, Yuma, and San Luis, Sonora to the first Mayor’s Summit held in Mexicali at the Casa De La Cultura where they had a full day agenda discussion on issues such as public safety, economic development, and environment. The meeting ended with a Memorandum of Understanding signing between them.

“For me, it was very important that our police and fire chiefs from all the border region meet and communicate with each other. We also had important agreements in regards to economic and tourism promotion,” Sanchez said.

Attending that meeting was Yuma Mayor Douglas Nicholls who was pleased to see Mexicali take an active role in the 4FrontED region.

“Mexicali Mayor Gustavo Sanchez’ administration was key to the expansion of the 4FrontED region. Together, we were successfully able to increase the strong relationship with the City of Mexicali and its economic development counterparts. Mayor Sanchez was proactive in binational and collaborative efforts alongside myself and area mayors to take our collective region to the next level. I am honored to have gotten to work with him on a variety of successes, such as the first-ever mayors’ summit in Mexicali and the follow-up 4FrontED Economic Development-based summit in Yuma. I’m grateful to Mayor Sanchez for setting the foundation for the flourishing, strong relationship between Yuma and Mexicali,” Nicholls said.

“For decades San Diego has worked with many of our closest neighbor cities to the south – including Mexicali – to foster economic growth, employment opportunities, and cross-border collaboration. Our commitment to that partnership is best seen in our delegation visits to Mexico City, to Washington D.C. and as members of the U.S.-Mexico Border Mayors Association. We look forward to continuing our shared advocacy and joint efforts with incoming Mayor Ávila Olmedo,” Faulconer said. 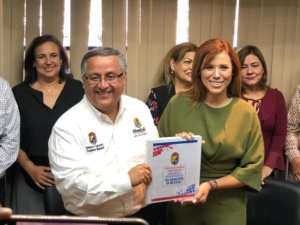 Mayor Sanchez recently held a press conference to officially kick-start the transition to the new administration that will be lead by Marina Del Pilar.

“I hope Mexicali continues with these efforts and continues to insert itself among the economic concert of the southwestern region, ” Sanchez said.

Mexicali Mayor-Elect Marina Del Pilar said she will have the best relationship with Imperial Valley and Calexico since they have strong family and economic ties that impact everyday life. Del Pilar said that Mexicali will work to improve the image, the infrastructure, and services of the city for those that come to visit Mexicali.

“We need to make strategic plans that benefit both cities and I am sure we will have a close relationship with our neighbors,” Del Pilar said.