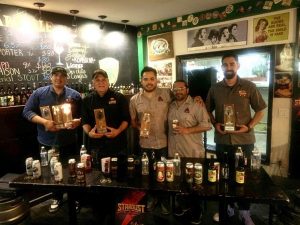 Mexicali craft beers shine big at the Ensenada Beer Festival that took place on March 18 and 19 where Mexicali beer won the top awards.

It’s no secret that Mexicali Craft Beer has positioned itself as one of the best in the nation due to its highest quality and production.

Camaleón, y Desertor were the winners at Copa del Pacífico 2022.

The Copa Del Pacifico is a competition made in Mexico with international projection.

Since 2011, COCEPA has evaluated an extensive number of beers, adhering to the principles of the BJCP, with certified national and international judges and experienced brewers.

With more than a decade of experience and being one of the largest craft beer festivals in Mexico, the Ensenada Beer Fest seeks to bring the best of the craft beer industry to the city.

People met the top purveyors and soak up all the different styles of craft beer in a great atmosphere with 120 craft breweries, 25 restaurants, 4 music stages, and 3 conference days.