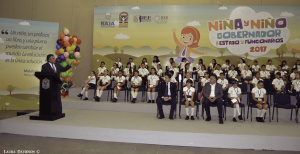 Mexicali.- Last April 28, fifty children who are at sixth grade in elementary school took oath to occupy the different positions in the 22nd City of Mexicali cabinet, where they had the opportunity to live the experience of working in public office.

For the selection process, a call was named “Municipal Public Official 2017” coordinated by the delegate of the State Education System Alejandro Bahena, as well as the Coordinator of Historic Archives of Mexicali, Oscar Hernández; And the Head of Libraries of the Municipal Institute of Art and Culture, Miguel Ángel Sandoval Espinoza.

There were 64,000 Baja Californian boys who were evaluated through a questionnaire on the history of Mexicali.

The protocol acts started at 8:00 a.m. in a session of the legislative power where the city mayor Gustavo Sánchez Vázquez took oath to the new children officials and expressed his cheerfulness for all the winning children.

Later they went to a party specially prepared for them to then take oath to the governor girl Alma Génesis Rodríguez Ríos, 11 years old, in the facilities of the State Center of the Arts. An event led by the government secretary Francisco Rueda Gómez, where he shared an extensive reflection dedicated to ”Children’s Day”.

“Today is a very special moment because girls and boys take on a very important responsibility in their lives. We are very enthusiastic and committed to them so they have the necessary conditions to make their dreams come true, it is a task we are responsible for as adults and as a government officials,” he said.

Finally the governor girl took an oath followed by a small speech on behalf of all children present.

“I am very happy to be here with my other classmates, it is an unforgettable experience and my parents are very proud of me,” expressed with pride the Lázaro Cárdenas elementary student.

She added that among the biggest problems in the city is the crime and lack of patrols in the different neighborhoods.

During the course of the day, each child was given the task of accompanying the corresponding official to witness the important work they perform day by day for the citizens. Each of them carried with great pride their personalized badge and card which they gladly handed to every person they encountered.

In short, it was an activity that will stick to the memory of each of the students and relatives who participated, as they are part of the future of Mexicali. We can be sure that they will look forward to preserve the security and well-being of the citizens now that they have witnessed the importance of legislation, different public offices and the citizens’ unity.