MEXICALI CELEBRATES THE 119TH ANNIVERSARY OF ITS FOUNDATION 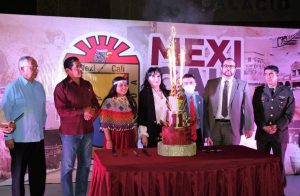 The capital of Baja California celebrated its 119th founding anniversary with a commemorative act in the civic quad of the Municipal Palace.

Initiating the protocol with a Guard of Honor at the Monument to “Los Pioneros”, presided over by the Mayor of Mexicali, Norma Bustamante, accompanied by the Coordinator of the State Cabinet Alfredo Álvarez Cárdenas, on behalf of the Governor of Baja California, Marina del Pilar Avila Olmeda;  the President of the XXIV Legislature of the State Congress, Juan Manuel Molina.

Also present were the President of the Superior Court of Justice of B.C., Alejandro Isaac Fragozo;  of the Second Military Region, Major Salvador Franco Herrera, and the Young Cucapah and National Youth Award 2021, Yadira Mateos González.

In her speech, Mayor Norma Bustamante highlighted that life in Mexicali is great, with a rich past, which is necessary to know because it is the origin of their strength.

The mayor pointed out Mexicali has enormous recognition worldwide due to the excellent skilled workforce with 130 companies established in the region that includes aerospace, automotive, metal mechanics, electronics, and services, placing itself in one of the most important manufacturing cities.

In addition, she emphasized that the Mexicali Valley is the base of agricultural development, which exports about 90% of its products.

Norma Bustamante recognized that it is the land of the first female governor in the history of Baja California, Marina del Pilar Ávila Olmeda, who, with her poise and effort, praises her origin and the destiny of our land.

The Mayor of Mexicali concluded her message by reiterating how essential it is to join efforts with the three orders of government, civil society, businessmen, in general with all sectors, to consolidate a prosperous, inclusive municipality, with well-being, development, sustainable, safe and in peace.

For her part, Yadira Mateos González expressed her emotion for directing this message, since it is the first time that a young Cucapah native participates in an event of this kind.

During the ceremony, there was the artistic intervention of the Music Band of the II Military Region, the Dance Group of the Cucapah El Mayor Community, the Municipal Folkloric Ballet, the “Esplendor” Folkloric Group accompanied by the Northern Group “Gil Bernal and Grupo Los Cazadores”.

Also, the participation of the Youth Mariachi “Tariacuri” interpreting the mañanitas accompanying the traditional cake cutting, concluding the event with a concert by the Chamber Orchestra of Mexicali (OCAM) with “El Cumbianchero”.