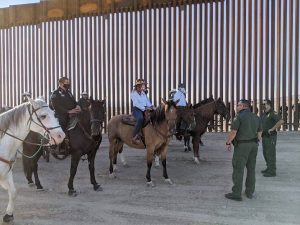 In order to strengthen security along the border, Mexicali Mayor Marina Del Pilar Avila Olmeda, in conjunction with border authorities, met with representatives of Custom and Border Protection.

During the meeting that took place at Mount Signal on the American side, a simulation of the binational operations carried out by the Border Patrol and the Mexicali Municipal Police was carried out to safeguard security in the border strip.

In this sense, the Mayor highlighted the importance of maintaining permanent communication with the CBP authorities, since this encourages mutual operations through which criminal acts are inhibited and deliver good results.

It was announced that, during this year, the CBP, in coordination with elements of the Municipal Police, carried out 165 operations, resulting in 296 arrests, 18 vehicles were seized, 3 firearms were seized and 11 rescues were made.

Thanks to these operations, 19 cases of damages to the border fence were presented to the Attorney General’s Office of which four of them are resolved and closed.