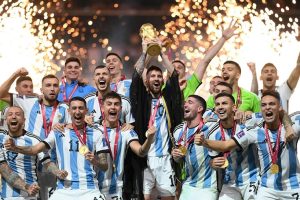 Messi’s once-in-a-generation career is complete: He is a World Cup champion.

In one of the wildest finals in the tournament’s 92-year history, the 35-year-old Messi scored two goals then another in a shootout as Argentina beat France 4-2 on penalties after a 3-3 draw to claim a third World Cup title.

Lionel Messi won his first-ever FIFA World Cup on Sunday after Argentina beat France in a penalty kick shoot-out in the tournament’s final match. Messi, one of the greatest soccer players of all time, secured the elusive trophy in what is likely his final World Cup. Argentina now holds three World Cup trophies, sitting behind only Germany (4), Italy (4), and Brazil (5) for most all-time titles.

Kylian Mbappe of France became only the second man after England’s Sir Geoff Hurst to score a World Cup final hat-trick, but it is Messi who takes the spoils, if not the Golden Boot, won by eight-goal Mbappe. Not that Messi will mind his Paris Saint-Germain teammate winning that race. Messi opened the scoring and looked destined for a straightforward triumph until France recovered from 2-0 down to send the game to extra time.

Messi’s strike from the penalty spot was Argentina’s 150th goal in World Cup matches. They are the third nation to reach that milestone after Brazil (237) and Germany (232).

The 2026 FIFA World Cup will be held in North America: in the United States, Canada, and Mexico. At the 2026 World Cup Football finals there is a record number of 48 participating countries.

Having three host countries is also a first in World Cup Soccer history. There will be 16 host cities: 2 in Canada, 3 in Mexico, and 11 in the United States. The 23rd edition of the FIFA World Cup™ will begin and end in the summer of 2026. The qualifiers will start in 2023. The 48 teams will play 80 matches in total at the North American finals of this international association football competition. The 2026 World Cup was awarded to North America on June 13, 2018.

The dates, times, and schedule of the matches will be released at a later date. The qualification stage starts in 2023 and ends in 2025, divided into six continental football zones worldwide: CONCACAF (North America, Central America, and the Caribbean), CONMEBOL (South America), CAF (Africa), AFC (Asia), UEFA (Europe), and OFC (Oceania).