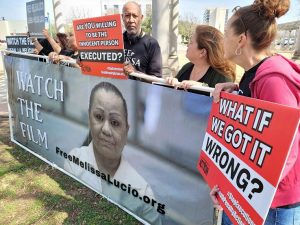 Melissa Lucio has walked through hell grieving the loss of a daughter and trying to escape the death penalty that has knocked on her doors several times. Her time is running out and once again she has escaped death as she was scheduled to be executed on April 27.

Texas’s highest criminal court on Monday delayed the execution of Melissa Lucio, the only Latina on the state’s death row, who was set to die Wednesday. The execution will be halted as the 138th Judicial District Court of Cameron County considers the evidence.

“I thank God for my life. I have always trusted in Him. I am grateful the court has given me the chance to live and prove my innocence. Mariah is in my heart today and always. I am grateful to have more days to be a mother to my children and a grandmother to my grandchildren. I will use my time to help bring them to Christ. I am deeply grateful to everyone who prayed for me and spoke out on my behalf,” Lucio said in a statement on April 25th.

Tivon Schardl, Capital Habeas Unit chief of the Federal Defender for the Western District of Texas and one of Lucio’s attorneys:

“We know that Melissa’s children — Mariah’s brothers and sisters — and Mariah’s grandparents, aunts, and uncles are all relieved and grateful that Melissa’s life will not be taken by the State of Texas. And we believe the court honored Mariah’s memory because Melissa is innocent. Melissa is entitled to a new, fair trial. The people of Texas are entitled to a new, fair trial. Texans should be grateful and proud that the Court of Criminal Appeals has allowed Melissa’s legal team to present the new evidence of Melissa’s innocence to the Cameron County district court.”

Melissa Elizabeth Lucio is the first woman of Hispanic descent to be sentenced to death in Texas.

She was convicted of capital murder after the death of her two-year-old daughter, Mariah, who was found to have scattered bruising in various stages of healing, as well as injuries to her head and contusions of the kidneys, lungs, and spinal cord. Prosecutors said that Mariah’s injuries were the result of physical abuse, while Lucio’s attorneys say that Mariah’s death was caused by a fall down the stairs two days before her death.

Lucio was questioned by law enforcement for several hours after Mariah’s death. She denied abusing Mariah more than 100 times before making a vague statement that she was responsible for what happened to Mariah. Lucio’s attorneys say that she was particularly vulnerable to making a false confession because she had a history of physical and sexual abuse.

Lucio’s case was the subject of a 2020 documentary, The State of Texas vs. Melissa. Lucio has maintained her innocence and Cornell Law School professor Sandra Babcock has called the prosecution “by far the weakest capital case I’ve ever seen”. Lucio had an execution date of April 27, 2022, but an appeals court stayed her execution on April 25, 2022.

On February 17, 2007, paramedics were called to the Lucio residence because two-year-old Mariah was unresponsive and not breathing. According to the Cameron County District Attorney’s Office, Mariah was found at the home with signs of abuse on her body. She reportedly had scattered bruising, bite marks on her back, patches of hair that had been pulled out, and a broken arm. According to Lucio, two days earlier Mariah had fallen on a set of stairs, leading to her injuries.

Mariah was pronounced dead upon arrival at a local hospital. It was later determined that Mariah’s arm had been broken two to seven weeks before her death, and an autopsy also showed a head injury and bruising of the kidneys, lungs, and spinal cord.

A pathologist, Dr. Norma J. Farley, testified that the child’s autopsy revealed she did not die from falling stairs and instead her injuries were consistent with a death from blunt-force trauma. Additionally, court documents state the emergency room physician said he had not seen a case of child abuse worse than Mariah’s.

Lucio’s defense argued that Mariah’s injuries were from falling down the stairs and that Lucio’s psychological functioning contributed to her conflicting reports given to authorities. Despite the defense’s arguments, Lucio was found guilty of capital murder and later sentenced to death in 2008.

Lucio was pregnant with twins at the time of Mariah’s death, and she had to give them up for adoption after delivering them while in jail.

As of 2022, Lucio is being held on Texas death row at the Mountain View Unit in Gatesville, Texas. A 2011 appeal against the conviction was denied. In 2019 a three-judge panel of the Federal Appeals Court overturned the sentence due to the trial court’s interference in Lucio’s right to present a defense. This decision was subsequently overturned and Lucio remained on death row.

In August 2021, an amicus brief was filed on Lucio’s behalf by a group consisting of legal scholars, experts on violence against women, and representatives from 16 organizations that fight violence against women. The brief states that Lucio’s subdued behavior and acquiescence during interrogation were the result of prior trauma as a survivor of abuse. They also argued that a judge’s order to exclude expert testimony on the effects of trauma had “deprived Melissa of the only means she had of explaining that, notwithstanding her demeanor and self-incriminating statements, she was innocent of her daughter’s murder.”