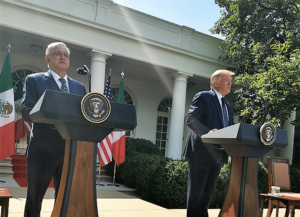 “The relationship between the United States and Mexico has never been closer,” Trump said during the press conference. “Both of our presidential wins focused on giving people the power again.”

President Lopez Obrador said that this trade deal is a triumph for the three nations and for their people.

“North America is one of the most powerful regions in the world but it is one with the biggest trade deficits,” Lopez Obrador said. “This new deal seeks to reverse by integrating our economies so we can recover the economic presence we have lost in the last five decades.”

Both presidents signed a joint declaration.

The USMCA is the largest, fairest, and most balanced trade agreement ever negotiated and contains innovative provisions to help increase global economic competitiveness as a region, grow the economy, and support American jobs, including those in manufacturing and agriculture.

In an election year and before the elections in the US, 19 meetings have been held between leaders of both countries.

Among the Mexican presidents who have held meetings with their US counterparts seeking re-election are: