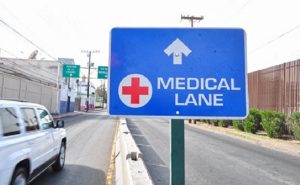 In relation to the operation and functioning of the medical lane, the Municipal Government, through COTUCO, announced that said access was no longer under the supervision of their government, since the month of March.

The “Medical Lane” was designed for those citizens or residents of the United States who visit Mexicali and perform some medical service, using a pass that allows users to access a special lane in the waiting line to cross the border into the United States minimizing the delay at the crossing.

Since its opening, COTUCO was responsible for its operation by promoting joint work with the Medical Cluster. There were good service and attention to users, generating an estimated economic income of 4 million pesos per year.

It should be mentioned that in February, on instructions from the National Assets Administration and Appraisal Institute (INDAABIN), the operation of the medical lane was transferred to a private company.

However, doctors and users went before COTUCO offices exposing disagreements due to the lack of order, as well as insecurity due to the presence of some people who cause inconvenience to motorists by asking for money to let them cross.

Recently, at the initiative of members of the City Council, a meeting was called to promote that the Medical Lane be operated by COTUCO again, however, until this request is formalized before the federal authorities, it does not have the powers to intervene in the operability of this access.