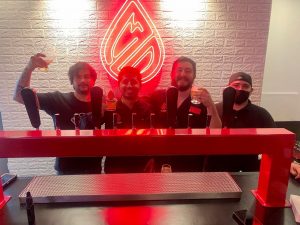 There is always room for one more beer place as Mexicali craft beer enthusiasts celebrated the opening of Cerveceria Media Sangre this weekend.

Mexicali is known for embracing Asian and Mexican cultures. What better way to honor that “half-blood” brotherhood than to have a new beer product that respects those roots while offering a variety of beer selections.

The Tap Room is now open at Hotel Calafia and had its grand opening on March 26. The public is welcome to attend.

“We are a proud one hundred percent Mexicali product. We are the union of many cultures, especially of Asian and Mexican and that’s where our name comes,” said Javier Elizondo, a partner of this business.

The reason for name comes from the owners, Armado Tapia Auyón who comes of Asian descent, and Elizondo whose family is from Guadalajara. They started as home brewers and made their first beer in 2018.  Since then, they worked hard to open their own place.

“The union of the two ideas is what made Media Sangre,” Elizondo added.

Located at Hotel Calafia on one of its main streets, Justo Sierra, the owners believe they can welcome people from all over the world and offer their beer that is made in Mexicali and is part of a booming industry.