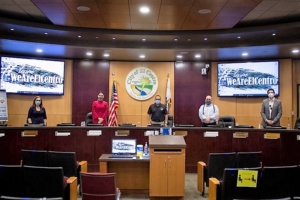 Mexicali, B.C.- In the framework of The United States Independence Day celebration, municipalities from the border strip, held a meeting to coordinate efforts, in addition to making a binational call to residents of both communities to stay at home and to cross the border only to carry out essential activities.

Due to the fact that both, Mexicali and the Imperial Valley, continue to present a high rate of coronavirus cases, the municipalities met to establish the necessary strategies to take care of citizens’ health.

In this meeting, the Mayor of Mexicali Marina del Pilar Ávila Olmeda, as well as the Mayors of Brawley, Norma Jáuregui, of Calexico, Rosie Arreola, of El Centro, Efraín Silva, of Imperial, Darrell Pechtly, and the Imperial County Supervisor, Jesús Eduardo Escobar, participated and the Governor of the State of California was also informed about the operations that will be established.

The Municipal President explained: “We know the dynamism that exists between Mexicali and the Imperial Valley, so we seek to support those who go out to work at these locations, and to those who have no need to cross, please avoid doing so.”

She announced that starting at 2:00 p.m. this past Thursday, 24-hour sanitary filters were installed again in the Central Zone border crossing and from 6:00 in the morning until 2:00 in the afternoon at the East port of entry, as well as Los Algodones and San Luis Rio Colorado, Sonora.

She reiterated that vehicles with more than two people who do not show proof of residence in the municipality or some essential activity to be carried out will not be allowed to enter the city. Also, it is not allowed to cross a certain amount of beer.

On the other hand, Marina del Pilar announced that another sanitary filter will be installed on the San Felipe highway since shops are closed and travel activities are still suspended, as they are in Mexicali.

For his part, the Mayor of El Centro, California, Efraín Silva supported the request of the Mexicali Mayor and asked Imperial Valley residents to avoid going to the state capital and, in doing so, only carry out essential activities.

The Mayors asked residents of both communities to join the call of the authorities, as this will prevent further positive cases of coronavirus, and it will also help reduce urban mobility, change the color of the stage in both communities that share the same border.