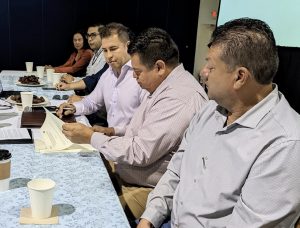 On June 9, Gerardo Anaya, Mayor of Somerton, Arizona, and Jorge Pivac, Mayor of Puerto Peñasco, Sonora, signed the ratification of the sisterhood agreement between their cities.

The ceremony was held within the framework of the “2022 Sonora Regional Fishing and Aquaculture Festival”, organized by the Intercultural Center for the Study of Deserts and Oceans (CEDO), in Puerto Peñasco, Sonora.

The ratification of the agreement is to strengthen the following areas:

Support on issues related to the environment, energy conservation, and the green economy.

“We are renewing this agreement to exchange ideas that can help our communities grow, promote our events together, as well as the tourist offer we have,” said Gerardo Anaya, Mayor of Somerton, Arizona.

“Peñasco will continue to be a bridge for economic, tourism, and infrastructure development for the mega-region that includes Sonora, Arizona, and Baja California,” said Jorge Pivac, Mayor of Puerto Peñasco, Sonora.