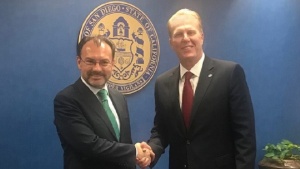 San Diego – As part of his effort to strengthen binational relations in the San Diego-Tijuana megaregion, Mayor Kevin L. Faulconer met with Mexican Secretary of Foreign Affairs Luis Videgaray a few days ago to discuss opportunities to bolster economic prosperity, improve infrastructure and protect the environment on both sides of the border.

“There has never been a more critical time for us to advocate on behalf of our binational region. This is all about working together to overcome our challenges, strengthen our economies and create opportunities,” Mayor Faulconer said. “I look forward to working with Secretary Videgaray and other federal leaders to create more efficient infrastructure, protect the environment and advance trade for both of our countries.”

The purpose of the meeting was to discuss binational policies and issues important to regional growth, global competitiveness and the environment. Some of the topics discussed include:

“Mexico and San Diego share strong and long-lasting ties that promote our mutual prosperity and strengthen the collaboration between Mexico and the U.S. It is in our common interest to continue deepening our relationship in terms of trade, energy, migration and the environment. In this endeavor, our shared border is a key area of prosperity and competitiveness,” said Foreign Affairs Secretary Luis Videgaray. “It is also relevant to underline the significant contributions of the Mexican community to San Diego’s economy, culture, and society.”

The meeting marks the second time Mayor Faulconer and Secretary Videgaray have met to discuss their binational priorities. Last year Mayor Faulconer, Tijuana Mayor Juan Manuel Gastelum and other regional leaders traveled to Mexico City to meet with top Mexican government officials, including Secretary Videgaray, as part of an annual advocacy mission to Mexico’s capitol. The delegation is expected to meet in Mexico City again in April.

Collaboration between San Diego and Mexico has led to stronger binational ties and more efficient infrastructure that has created safe and legal ways for goods and people to cross the border. Recent examples include the PedWest cross-border pedestrian bridge at the San Ysidro Port of Entry and the Cross Border Xpress that leads to the Tijuana International Airport.