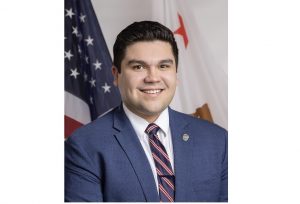 Imperial County Senior Deputy District Attorney Mario Vela was the top vote-getter in the June primary election and is now at a full-force campaign knocking on doors, meeting voters, and focusing on winning.

“I am very humbled by the public’s response to our campaign. The public knows that I want what they want –and that is a safer Imperial County and that message came across.  The People know that I am running for the betterment of the community and that I am in service for the People,” Vela said.

Vela is very passionate about his job and wants to put that passion into action. Vela has clear objectives: 1) To actively engage in recruiting more prosecutors; 2) Involve the Community in the work that the DA’s Office does, and 3) Focus on aggressive prosecution for a safer Imperial County.

He wants to end gangs and gun violence by being a mentor to the youth in the community and have the District Attorney’s office work with schools so they can teach children to not go into a life of crime. Regarding the firearm problem in Imperial County, Vela said they come across many reports of felons in the possession of firearms. “We need to be more aggressive with the felons that own these firearms and send a clear message that gun violence is not going to happen anymore, not on my watch,” he said.

The candidate wants to prioritize domestic violence, child abuse, and elder abuse, and empower these victims to come forward and speak up about the abuse.

“We care about keeping everyone safe, protecting the innocent, and seeking justice. I want to remind people that the D.A.’s office is here to help them. We are on their side,” he said.

Vela and the District Attorney’s office have a record of going against political corruption and that is not going to change.

“I want people to know that they will have a District Attorney that will be breathing down the neck of the corrupt because when it comes to corruption I will not look the other way. I want to create a unit specializing in political corruption. I want more transparency from every single public agency and every single elected official in this county because we work for the people and we owe that to the people,” he said.

The office currently has twelve prosecutors for the entire county. Vela said he will work with the Imperial County Board of Supervisors so they can market this job and get more people to come work here.

“I won’t stop litigating. I just can’t be tied up to a desk and just delegate. I will continue personally prosecuting side by side with my fellow prosecutors.”

When it comes to homelessness, Vela wants to work with other agencies to get them the mental health and addiction treatment they could qualify for but also work to address misdemeanors and offenses that create a nuisance or property damage.

“Most people think misdemeanors are low-level offenses but they affect the community, they affect businesses, they affect public safety, people don’t go out anymore because they see these people out in the open doing drugs or causing disturbances and I want to get those people the help they need if they truly want to change, but if they do not – they will be reminded that their actions have consequences.”