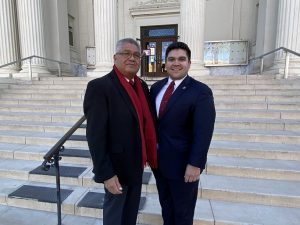 “Mario Vela for The People”

Those are the words Deputy District Attorney Mario Vela proudly says when he goes before a judge in a courtroom representing the People of the State of California.

At the early age of 31, Vela shows an extraordinary passion for the law and is a talented litigator when he’s on trial. Young and experienced, Vela is running to become the next Imperial County District Attorney and is hungry to revitalize the office and involved it more in the community. Vela is the only candidate that is a lifelong resident of Imperial Valley and due to his love for this community, he decided to come back to be an attorney, but most importantly, a public servant.

Every day, Vela represents the People of the Imperial Valley, with professionalism, exceptional courtroom etiquette, and an exemplary grasp of the law. He is respected by all those who come into contact with him, and values fair, but aggressive prosecution. Vela plans to continue to prosecute cases with a hands-on approach – simply put, he belongs in the courtroom and wants to stay there, even if he has the honor of being the elected District Attorney.

For 27 years, Gilbert Otero has held the position of District Attorney but, before candidacy registration began, the incumbent announced that he would be stepping down from a position he has held since 1994. Otero endorsed Vela to succeed him.

Born in Mexicali, Baja California, his family moved to Calexico when he was four years old. His father owned a car sales business. He graduated from Imperial Valley College before moving to San Diego. After graduating from UC San Diego he worked for a San Diego Law Firm before going to Boston, Massachusetts to get his law degree from Suffolk University graduating with a concentration in Trial and Appellate Advocacy.

“I always had this cultural and emotional pull that drew me back here to dedicate myself to this community as a public servant,” Vela said. “Being a prosecutor gives me a sense of purpose. I get to give back to a community that watched me grow. I make a small impact one case at a time. Words cannot describe how passionate I am about this job. That is exactly why I want to be the next District Attorney.”

Vela has also been a Mock Trial Coach for Vincent Memorial Catholic High School where they won several tournaments. He was hired by Otero in 2018 and said he knows how to modernize and make the office more effective. He said that he will do everything to protect and remember Otero’s legacy, build on it, and create a legacy of his own.

“That’s a promise I make to all of you. And I will carry this promise once I’m elected. The people of Imperial County will have a District Attorney that not only sits behind a desk but also inside the courtroom. I will not stop litigating. That is my commitment to you,” Vela said.

Vela plans to restructure the office and create different divisions. The domestic violence unit will become the homicide prevention unit because domestic violence is the number one indicator for further homicides when it comes to women being killed by their partners.

“There are currently fifteen active murder cases in Imperial County and only four attorneys, including me, with the trial experience them. There are other 16 murders unsolved in Imperial County. I will create a murder task force comprised of people devoted to the prosecution of these crimes to get justice for those who lost a loved one,” Vela stated.

He will also create an Environmental Crimes Unit to protect the land of Imperial County.

“We want to prosecute those environmental crimes and we want to have a tough on crime approach. I want to strengthen our relationship with law enforcement so we can work together to keep you all safe. We want to mentor the community’s youth and have the D.A.’s have a presence in all the schools across the county. Being leaders in our community and being prosecutors we have a duty to give back and mentor,” Vela said.