MARINA DEL PILAR WILL STRENGTHEN THE ECONOMY OF FAMILIES 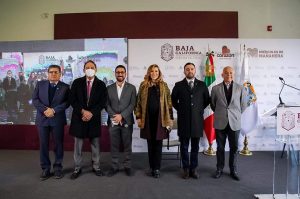 To strengthen the economy of the families with the greatest need in Baja California in the context of the Covid-19 pandemic, Baja California Governor Marina del Pilar Avila Olmeda, announced the launch of a Business Financing program oriented to strengthen small and medium-sized companies, which constitute a true engine of Baja California development and which constitute the main income of thousands of households, for this, together with the federal government, a budget of more than one billion pesos is available.

During the fourth edition of “Morning Wednesday with Marina del Pilar”, held in the city of Tijuana, the Governor pointed out that an authentic economic dynamism is one of the priorities of her administration since this is tied with the expansion of policies of Social Welfare that leads the Fourth Transformation, therefore, an investment of more than one billion pesos will be allocated to the business strengthening program.

In this sense, she detailed a series of actions such as the “Empréndete Program”, which is aimed at entrepreneurs who require furniture and equipment as an initial investment to start their businesses, for which support of up to 30 thousand pesos will be allocated.

Another example is the “Despega Program” which focused on the acquisition of supplies and tools that are necessary to take off your business ideas, having the State Government as an ally for the fulfillment of its objectives.

The Secretary of Economy and Innovation of Baja California, Kurt Honold Morales described that there is an initial bag for them, projects, which also include helping companies to protect their payroll from problems they had during the pandemic, which will prevent people from losing their jobs, and with it the support of their families.

In the meeting with the media, the Secretary of Tourism of Baja California, Miguel Aguiñiga Rodríguez delved into the importance of Social Tourism and in the actions of the State Government to promote tourism companies due to the capacity of these to generate sources of work.

Marina del Pilar Avila Olmeda emphasized the growing relevance that Baja California has for the national economy due to its strategic position, for which she argued that the necessary policies will be undertaken to take advantage of these competitive advantages and transform them into well-being for the population, especially the sectors that were forgotten for years.