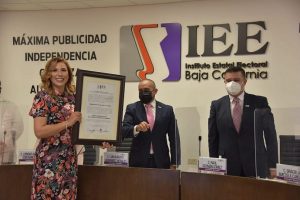 MEXICALI, B.C.- Yesterday, the official recognition of the candidate by the coalition “Together We Will Make History in Baja California”, Marina del Pilar Ávila Olmeda, was held at the IEEBC (Baja California State Electoral Institute) offices, through an extraordinary session in which the Majority Certificate was delivered by the General Council, this after the so-called most influential electoral process in Baja California in which she obtained more than 542 thousand votes, which represents 48.4 percent of the total of the votes.

With 7 votes in favor, the agenda for the fiftieth session was unanimously approved, thus, the participation of three women running for the state governorship was acknowledged as a historical fact in Baja California during an electoral process as well as its presence in the candidacies for mayor and city councils.

Marina del Pilar Ávila said: “Today is a historic day, without a doubt, for Baja California women, for the struggle of many and I am convinced of working together with society we will make a great government for everyone. The gratitude is the memory of the heart and from here my enormous gratitude to the people of Baja California who voted freely and forcefully for our government platform. I’m not going to let you down.”

In that sense, she pointed out, her government will be dedicated to generating jobs, schools, and hospitals, working in the fields, new roads, as well as defending rights, for the welfare of the population.

Thus, a press conference was held after the session in which she reported some details about her performance in the coming months, and until she occupies the position for which she was elected.  She clarified that she will be working on the formation of a cabinet with trained, technical people who will function as experts in the positions they will occupy.

In this way, the elected governor assured them that she had a great obligation to respond to the people of Baja California.  “I am not going to fail those who placed their trust in me and our project, nor am I going to fail those who did it for other parties, I will work to earn the trust of everyone (…) when I see a person I do not see colors, I do not see parties, I see a person who loves Baja California, who has needs, that there are problems to attend to and that there are problems to solve, of course under the principles of the fourth transformation,” assured del Pilar.