Marina del Pilar presents the program “Me Against Violence” 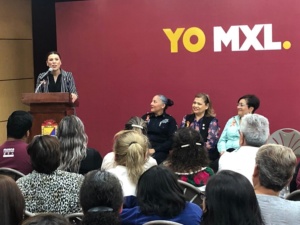 During the national day against women’s violence, the directors of the Municipal Public Safety Department (DSPM), the Domestic Violence Unit (UVI), and the recent Municipal Institute for Women met with the mayor, Marina del Pilar Ávila, presented the program “Me against violence” at the Mexicali City Hall.

The program consists of three conferences which will be held on Friday, November 15, 22 and 29, to present talks in relation to the different types of violence, as well as the areas where more cases tend to occur, such as courtship, coexistence at home, and the aggressions that happen on public roads. This was stated by the Director of the program, Amelia Martínez.

In the first Conference, entitled “Police Protocol on violence against women,” the Director of the municipal police of Mexicali, María Elena Andrade presented the efforts that have been established to act promptly, and in a timely manner, through the implementation of methods based on trained personnel to take care of victims of violence, especially in the case of women, who are often related to marriage or couple issues.

Marina del Pilar said she was very satisfied with the works that are being carried out in favor of enforcement against domestic violence, and against women; for which the creation of the Municipal Institute of Women, will strengthen the actions that have been implemented so far. Pointing out these conferences are open to all citizens, which look for more people to join this cause and learn about the signs that are manifested at home, which could generate into acts of violence.