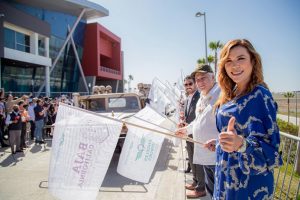 Recognizing the value and tourism potential of Baja California, Governor Marina del Pilar Avila Olmeda, led, together with the Secretary of Tourism of the Government of Mexico, Miguel Torruco Marqués, the start of Holiday Operations Holy Week 2022, which took place in the municipality of Playas de Rosarito.

During the ceremony, which placed Baja California as the national tourism epicenter, the Governor highlighted the work of the authorities to coordinate in pursuit of the same objective, as well as the constant collaboration of tourism entrepreneurs and civil society, without which no economic recovery of Baja California would be possible.

She gave special thanks to Torruco Marqués, whom she recognized as an ally of national tourism development and especially of Baja California since he was part of the creation of the Baja California Tourism Secretariat, which is currently chaired by Miguel Aguiñiga Rodríguez.

She highlighted the will of the federal official to choose Baja California as the headquarters of the national Easter Operation Banner, in a clear statement that the entity is an ideal space for national and international tourism, due to the efforts of the different sectors, tourist benefits, culture, and natural wealth.

In her message, Marina del Pilar Avila Olmeda stressed that Baja California is where the homeland begins, so visitors should be clear that, as well as the National Guard, the Mexican Army, Civil Protection, the municipal police, in the entity everyone joins forces and forms a team to offer visitors the best vacations.

“I know well that, in Baja California, we are capable of teaming up and giving the best of ourselves during this season.  Each of us, from our trench.  Hoteliers, waiters, merchants, artisans, taxi drivers, tourist guides, traffic police, you are the face of our State, you are the ones who will make the tourist live in Baja California an unforgettable experience,” she said.

The Governor added that it is the friendliness, nobility, and warmth that distinguishes the people of Baja California, its best move, and its tourist victory since this is where good memories are built that visitors will take from our entity.

Likewise, she made a call to enjoy family vacations, enjoy healthily, take care of oneself, respect the speed limits on the roads, not drive exhausted, and avoid carrying out activities in prohibited areas, to avoid accidents that could have negative consequences.

For his part, Miguel Torruco Marqués pointed out that this Thursday’s inauguration has great significance since it opens the door to economic recovery after two difficult years for tourism in Mexico, and the world derived from the crisis that generated the health contingency caused by the Covid-19 pandemic.

“This 2022 shows a clear sign of recovery. An example of this is the encouraging tourist expectations for this holiday period that runs from Saturday 9 to Sunday, April 24 of this year.  In total, we expect the arrival of 10.2 million national tourists, who will visit the different destinations in our country”, he explained from the beginning that took place at the Baja California Center, in Playas de Rosarito.

Of this total of visitors, it is expected that more than four million will stay in hotels, in addition to the fact that more than 1.3 million could get a room using digital platforms, which is a symptom that the way of doing tourism is changing worldwide, and the authorities are ready to face this evolution.

She also announced that the economic benefit for Holy Week in Mexico is 169 thousand 742 million pesos, which represents a significant economic jump since even figures from the time before the pandemic will be exceeded.  Another important point is that five of the seven municipalities of Baja California: Tijuana, Mexicali, San Felipe, Playas de Rosarito, and Ensenada, are among the municipalities with the highest projection for hotel occupancy at the national level.

In his participation, Aguiñiga Rodríguez explained that only the first quarter of 2022 has already significantly exceeded that of 2021, in addition to the fact that, during the Easter period, the tourist numbers will be even better than those reported in the years before the Covid-19 pandemic, due to the enhancement of medical tourism, meetings, wellness, wine, gastronomy, among others.

As part of her agenda this Thursday, Governor Marina del Pilar presented the tourism brand “Welcome to Baja California” to businessmen and society in Baja California, which will be used to promote the different tourist destinations in the state to the rest of the country and the world.

Secretary Torruco Marqués was also present at the presentation, who highlighted that through projects like this, the tourist potential of Baja California is revealed, for which he supported Marina del Pilar Avila Olmeda’s vision on the matter.

“Here in Baja California we are beginning a new stage in the way of being tourism, a stage of new trends in the industry, today we are ready to reactivate our economy at 100 percent, to welcome you and show you that the State is a mosaic multicultural of our seven tourist destinations”, added the Governor.

Subsequently, Marina del Pilar presented the promotional videos of the seven municipalities of the State, making it clear that the Baja California tourism industry is stronger than ever, sheltered by a comprehensive public policy, by the tourist vocation of its communities, and by a State that does not cease to amaze with its various riches.

“Welcome to your valleys, come and enjoy our revolutionary cuisine, discover the flavor of our land, and the benefits of our ingredients, which make our wines recognized worldwide,” she said.

Finally, Marina del Pilar Avila Olmeda presented an award to Miguel Torruco Marqués on behalf of the Government of the State of Baja California, due to his more than 51-year career as an outstanding promoter of tourism development in Mexico.