Marina announces actions and investment to rescue the Lagunar System 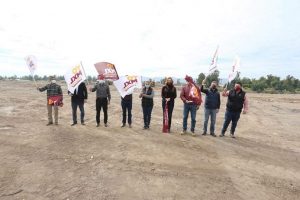 Mexicali. – With the objective of restoring the Lagunar System of the city and within the framework of the celebration of the Wetlands Day, Mayor Marina del Pilar Ávila Olmeda announced actions and the investment of more than 17 million pesos.

She pointed out that the above is intended to improve the quality of the environment and the health of the population.

In this sense, she reported that 15 million pesos will be invested to prevent the spill and leakage of wastewater into the lagoon complex, by encapsulating the transfer center that is located nearby.  This work will also prevent contamination throughout the area.

Likewise, she announced that 2.4 million pesos will be applied in sanitation and afforestation works of the lagoon complex, and an agreement was signed with the UABC, to provide advice and legal certainty to the recovery works.

The Mayor thanked the efforts and work carried out over several years by civil society organizations, such as “Salvemos las Lagunas”, “Sonoran Institute”, Club Campestre, among others because thanks to this they were able to lay the foundations for regenerate the natural area.

Marina del Pilar stressed that the rescue of the lagoons is one of the strategic axes of her government and is even a promise that she made during the campaign.

“Also, we will close the accesses to the area to prevent vehicles from entering to dump waste clandestinely, and training will be given to the community in conjunction with the Public Security area, for the surveillance and protection of this space,” said the mayor.

In this regard, Pablo Chee, who heads the Mexicali Civic Environmental Committee, recognized the support of the municipal government to redouble security in the area, which has been able to prevent damage to the area, theft, and vandalism.

In turn, he highlighted the work that will be done with the encapsulation of the transfer center, although he asked the population to avoid paying people who throw rubble to dispose of their waste since that garbage ends up in the lagoons.

The Mayor thanked the state government for support through the CESPM and its head Armando Samaniego, to consolidate the sanitation work in the lagoon system.

She added that with citizen participation and coordinated work between the academic sector and the different levels of government, the quality of the environment in Mexicali will be improved.