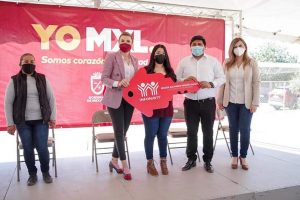 With the premise of rebuilding the social fabric and fighting a public health and insecurity problem, Mayor Marina del Pilar Ávila Olmeda, in coordination with INFONAVIT authorities, delivered the first recovered and restored houses.

In this sense, she pointed out that reducing the problem of abandoned housing was a citizen demand that was ignored for years, so the current federal and municipal administration is committed to transforming these environments.

This Tuesday the beneficiaries were given the keys to the first four restored houses.  The first stage includes 122 properties, for a total projection of 1 thousand.

Along with this, Marina del Pilar explained that the Government of Mexicali also seeks to regenerate the area, for which it invested in the remodeling of the public park of the Portales II Fraction, which was delivered with children’s games and a kiosk, in addition to having with free internet.

“It is a general problem, but my occupation was Mexicali since it is the city that has the largest number of these houses in the State. However, this opens the door for other municipalities to join, since it is an issue that affects citizens throughout Baja California.

For her part, the delegate of INFONAVIT in the entity, Ana Lizeth Gómez, stressed that thanks to the work coordinated with the City Council, the state capital is one of the first municipalities nationwide to carry out forceful actions of attention to housing abandoned by this program.

In his speech, the general secretary of Infonavit, Rogerio Castro, on behalf of the general director of the Institute, Carlos Martínez Velázquez, recalled that a year ago a collaboration agreement was signed with authorities from Sedatu and Mexicali, to carry out actions to solve the problem of these properties.

Likewise, he highlighted the recent approval of the Reform to the Infonavit Law which will allow workers to exercise their right to housing directly and without intermediaries.

“Now yes, Infonavit is at the service of workers and with that commitment, we reform the Law. The worker will decide where he wants to live and how he wants to live,” the federal official stressed.