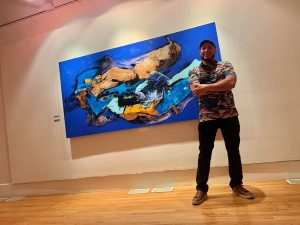 MEXICALI, B.C.- The opening of the individual exhibition “Reconnections” by the Mexicali artist Marco Miranda was held at the House of Culture of Mexicali, this being the fourth one done in the city, which consists of 17 works such as paintings, photographs, and sculpture in various formats.

The artist is recognized for working with the so-called reverse technique, said work was the result of two stages of creation, the first of a three-week residency in the desert of Landers, California in which he worked with an American photographer.  In the second period of production, mostly built this year after the quarantine.

Miranda commented, his presentation covers: “how we began to work as human beings internally to be able to create and in this phase it is the isolation that we had forced that was like learning to detach from things, a new phase that we have in life and yet we have to  keep moving forward.”

It is worth highlighting an apparent division between the use of powerful colors and shapes with which creation and life are glimpsed, on the one hand, coupled with another section of the exhibition in which cold colors and metals stand out, but which converge and they become an intrinsic journey.

Of the materials used, such as metal, Miranda mentioned was the only artificial or non-natural element found in the desert, and for this reason, he decided to use it as a means for the spectators to reflect on it. “The concept of ‘Reconnections’ is that, how we detach ourselves from nature when that is really when we reconnect,” he concluded.

The exhibition will run until June 21. To follow the artist’s work, you can find him on social networks such as the painter Miranda or Marco Miranda.