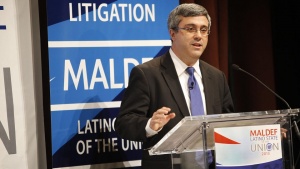 “In a craven and gratuitous abuse of presidential power, Donald Trump issued a Friday-night pardon to an adjudicated discriminator and disgraced former sheriff, Joe Arpaio. Apparently cognizant of how utterly inappropriate the pardon would be, Trump stated on Tuesday night that he would not pardon Arpaio that night to avoid ‘controversy.’ So he waited until Friday night, traditionally the night politicians bury their most embarrassing revelations to avoid weekday attention in the news. In this case, the embarrassment factors are legion, but the obvious disrespect for the rule of law – Arpaio was convicted of contempt of federal court orders – surely leads the list of reasons this pardon was buried on a Friday night.

Oh, how the White House has miscalculated! The Latino community will remember this Friday night torchlight pardon – in history and at the next election. Pardoned without sentence having been imposed and without having pursued an appeal in order to demonstrate his asserted innocence, Joe Arpaio will go down in history as a federal convict whose misdeeds required presidential intervention; there is no vindication for Arpaio in what transpired on Friday night. Trump, on the other hand, will go down in history as the Apologist-in-Chief who once again implicitly endorsed racism and discrimination, while also sending a message that some people are above the law.”