In Mexico, every 2nd of November the Day of the Dead (known as Día de Muertos in Spanish) is celebrated. On this holiday, Mexicans remember and honor their deceased loved ones. Being a festive and colorful holiday celebrating the lives of those who have passed on. Mexicans visit cemeteries, decorate the graves and spend time there, in presence of their deceased friends and family members.

Day of the Dead altars, also known as “altares de muertos” or “ofrendas” are set during the Day of the Dead celebrations on November 1 and 2 to honor the dead children and adults.

Day of the Dead celebrations are based in the belief that the soul of the ones gone can come back to this world on these days.

The Day of the Dead altars are the most prominent feature in the celebration because they show the souls the way to their home.

Altars make the souls (animas) feel welcomed and show them they have not been forgotten.

Government institutions, associations, families and schools place their altars every November, choosing one or more people who have passed away for the altars.

On this occasion, ORBIS International school in Mexicali, previously Colegio Corregidora, built an altar dedicated to Maria Cristina Ramos Flores, popularly known as “MaCristy” who was known for her kindness, care and empathy towards others.

MaCristy was married to arquitect Victor Hermosillo Celada, and they formed a family of four children together: Maria Cristina, Daria, Victor, and Ana Isabel.

The beginning of her husband’s political life also marked her life and her great struggle for minorities, beginning in 1975 with her candidacy as a candidate for council woman in Mexicali, where she also grouped a number of women and founded the group “Mujeres Libres en Favor de la Democracia (Free Women in Favor of Democracy)”.

Among the most important activities she worked on are: the anti-graffiti program, with her own resources she provided of vests, gloves and belts to garbage collection employees, authorized the support of city’s council members to schools in need, generated employment opportunities for the Association of Blind people getting the construction of the Trappy Mops Factory approved.

In 1986, already consecrated as a leader in her political party, she obtained the candidacy to run as city mayor of Mexicali. Years later she assumed the position of senior official of the State Government of Baja California in 1995 when Hector Teran Teran was governor.

In 1998, she became the president of the DIF and the first Lady of Mexicali, a position in which she carried out activities such as scholarship programs, incentives for basic education, school breakfasts, scholarships for disabled children, street rescue programs, and being one of her most relevant and important projects were the establishment of the home for boys, CAHOVA, and the center of attention to violence CAVIM.

Macristy died on May 23, 2001, fulfilling her task because she came with a mission, she knew how to discover it, and perform it, she gave out of herself, served and helped others.

At the altar’s inauguration ceremony, moved by the dedication showed in the making of the altar in memory of his mother, his son mentioned: “The hardest part of death is how permanent it is, since you can never see people again. Sometimes you would like it to be possible to see them at least 15 minutes a year, you can’t help but miss them. My mom was a great person.” 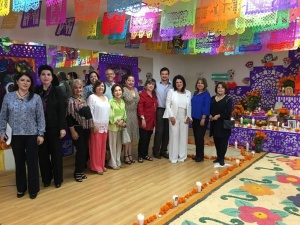