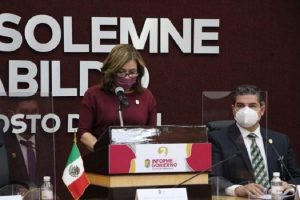 Having City Hall as the headquarters and before the members of the city council, Mexicali Mayor Lupita Mora Quiñónez, gave the second State of the City address, where she exposed the main actions undertaken in the second year of the current administration.

Lupita Mora Quiñónez assured at all times her work at the head of the Municipal Government was carried out in a responsible, efficient, ethical manner and without giving rise to corruption and impunity.

“Governing Mexicali is a privilege, an honor, we have worked tirelessly every day, visiting the communities of the city, the valley and San Felipe, it is clear to us that, if we do not form a community, if we do not know the problems, the needs of our city, we cannot advance, have direct contact with citizens, listen to them, dialogue, team up with them, draw up projects, in a word, organization, society and government,” the Mayor said.

Lupita Mora highlighted the work done with the community serving as facilitators to bring public services where citizens need them, care for vulnerable groups, as well as promoting culture and sports.

In this sense, the Mayor added: “In this administration, there was no partisan distinction, it was governed for all, it was a horizontal government, corruption, impunity, and influentialism were fought.”

In her message, Mora Quiñónez stressed it is important for the people to know that their work is attached to the principles, seeking a more equitable, fairer, more dignified municipal government, promoting the Fourth Transformation and the Alternative Nation Project, following the axes guiding not to lie, not to betray and not to steal, and not as simple rhetoric, but with the conviction that this is the only route for a fundamental transformation.

She also thanked the media that were present at the press conferences “Las Mañaneras de Mexicali”, in the acts and events that were carried out by the 23 City Council, whom she recognized for their great work of communicating to society what that is done in this government.

Likewise, he recognized those who made the great effort by actively participating in the massive vaccination campaign against COVID-19, doctors, nurses, volunteers, the National Guard, and SEDENA.

Finally, she thanked the residents of Mexicali, the Valley, and San Felipe, for the trust they placed, “we lacked time to carry out more activities, projects, but I am sure that what we do with great responsibility, with great enthusiasm, capacity, and efficiency, leaving a precedent for this new way of governing,” Mayor Lupita Mora concluded.