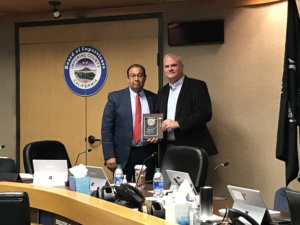 The Imperial County Board of Supervisors appointed Luis Plancarte as the new chairman of the board at their regular meeting held Jan. 7.

The beginning of the year always marks a change in leadership for the Board of Supervisors as a new person becomes the face of the county and provides a new leadership vision.

Supervisor District 4 Ryan Kelley was the chairman of the board in a very challenging year for the county as he pushed for an emergency declaration on the Salton Sea. Kelley decided to take this action since he believed the state should step up in their responsibility to restore the Salton Sea. A response by the State regarding the emergency declaration was sent to him in his final day a chairman.

The California Environmental Protection Agency informed Kelley that Governor Newsom’s proposed 2020-21 budget to be released later this week will add to the State’s commitment to improving conditions at the Sea by proposing an additional $220 million for the Salton Sea Management Program. This proposed funding would bring the State’s total financial commitment to $891 million.

“Since taking office, Governor Newsom has directed us to break through the bureaucratic barriers that have hampered progress stabilizing conditions at the sea,” the letter read.

Kelley said he was glad to see the additional funding in the budget but said the county will be evaluating the response.

Kelley passed the gavel to Luis Plancarte and wished him the best on his year as chairman of the board.

Plancarte thanked Kelley for his hard work and said he learned many things from him during the last year.

“2020 is the start of a new decade and we will continue working for Imperial Valley to bring more employment and economic development for our residents,” Plancarte said during his remarks. He asked everyone to be counted on the upcoming census that will take place in 2020.

Prior to being elected to the board of supervisors, Plancarte was involved in several community organizations and is active in youth programs and other community-oriented projects.