Love on the Border: Kayla and Vidal 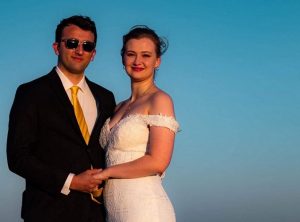 For California’s ‘Stop the Hate’ Initiative

The story of Kayla Kirby and Vidal Ramirez is one of love and friendship. It’s a love tail that bridges the chasm between people who come from different cultures, speak different languages, come from different nations, and stand as testimony to racial and cultural amity.

Kayla Kirby, an Anglo, grew up in New Roads, Louisiana but moved to Imperial Valley when her dad relocated to the Naval Air Facility in El Centro, California, in August 2012, right before her sophomore year of high school. The relocation meant that she would experience life in a state she was unfamiliar with and had no friends. That soon changed as she accustomed herself to her new environment.

“My first impression of the Valley is probably obvious … it is hot! But I was excited to go to a new school. It was a little bit of a culture shock but that didn’t last too long,” Kirby said.

Kirby admits that Spanish was a bit of a challenge at first, but the more involved she got in the community and school events, the more she started to understand and become part of the community. She met Vidal Ramirez, a Mexican American, in 10th grade English class, and they became friends.

They joined the Latin dance club together and Kirby recalls performing twice at the county fair. “During one of our performances, I completely forgot the next dance move and I started freaking out. He calmed me down and kept me dancing without looking like an idiot.”

They started dating soon after.

Kirby describes her relationship with Ramirez as that performance. “I am often spinning between the craziness of my job, my family, being a mom, and my education … but somehow he helps me keep moving and keep it all together. He makes sure I keep dancing,” she said.

Kirby’s personal and professional career was formed in Imperial County as she found a job as the office manager, reporter, and editor of a local newspaper where she was able to win journalism awards with her team. Kirby currently works at the Imperial County Regional Chamber of Commerce.

Ramirez and his father own a blacksmithing and welding business called D’Marcos Fence and Ironworks. The young millennial couple has been able to blend and create a successful career together and represent what the phrase “couple goals” means by blending two different cultures and contributing to making their community a better place to live.

Kirby and her husband both attended Imperial Valley College and were planning to transfer to Columbia College together. They were both business admin majors but she fell a little bit behind after having the baby. However, they still plan to transfer together and continue their education.

They have one daughter, Elodie Genevieve Ramirez.

“I don’t speak fluent Spanish but I speak enough to get by. I’m taking a Spanish class right now since my daughter is bilingual. I want her to grow up fully immersed in her culture,” Kirby said. Her daughter’s first and middle names are both French from her background.

“Her last name is Ramirez, my husband’s. She was raised in the culture of Imperial County and Mexicali. She spends a lot of time with my father-in-law in Mexicali,” Kirby said. “Elodie will be learning to cook from me and my mother-in-law. We make homemade tortillas, pozole verde, and many other dishes I’ve learned from my mother-in-law and grandmother-in-law,” she said.

Kirby said that while her in-laws were very welcoming, (her father-in-law gave her away at the wedding) the difference in culture was a bit of a struggle with her in-laws. “I was always very blunt and that came off as rude when I was getting to know my in-laws,” she said. It took her a while to realize that they thought she was angry, but Ramirez managed to act as a go-between and explain the cultural gaps. “He helped us all see eye to eye. I don’t feel like I struggled that much to blend with his family because he is wonderful … ensuring I understand the culture we want our daughter to have.”

Marrying into a Mexican family meant that she had the opportunity to cross to the city of Mexicali, Baja California, Mexico. Living in a cross-border community where people visit their family and do business is something that not many in the world can experience.

“We want to raise her with both backgrounds in mind, not to view one as more important than the other, to eat tamales and jambalaya. To embrace traditional events like Mardi Gras and El Grito. To feel connected to the people of their country and the one where a big part of their heritage comes from,” Kirby’s husband, Vidal Ramirez said. “The biggest strength we’ve experienced culturally is learning how similar we are as opposed to how different, our customs, our food, and even our myths and tall tales. We have found a lot in common with minor differences, akin to comparing Jambalaya to Paella. This strength is one we hope our children learn, that more things bring us together than what sets us apart from other cultures.”

Vidal and Kayla want to raise their daughter bilingual so she spends a lot of time with her paternal grandfather who takes her to the fairs and festivals in Mexicali.

“I love being exposed to the art and culture in this area. The food is phenomenal. I cook more like my mother in law than my family back in Louisiana,” Kirby said.

They visit Kirby’s family once or twice a year so their child can learn about Louisiana’s culture. “I do still cook some southern dishes. As she gets older we hope to teach her about the culture of both of her families,” Kirby said.

Kirby and Ramirez are living their lives as homeowners and professionals and enjoying the best of two cultures. The love they found has strengthened each other and added a special multicultural spice to their lives.