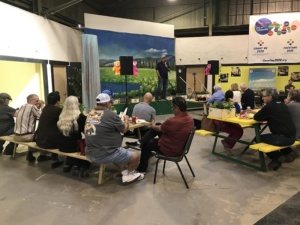 The Ferris wheel, the carnival, and all the other fun stuff will be back in 2020 in the California Mid-Winter Fair.

The California Mid-Winter Fair will take place beginning Feb. 28 to March 8, bringing once again a diverse entertainment to Imperial Valley and Mexicali residents.

The annual media day was hosted at the fair to let the media know what will take place at the fair.

“This year we have new musical performances that have never been here before and new additions to the carnival for kids and great food,” said Alan Philips, CEO of the Imperial Valley Fairgrounds.

Local high schools will compete in the annual March madness in which the schools’ drumline teams will bring out their best and try to win. This activity will become one of the most anticipated events at the fair.

Corey Oakley, who is in charge of the carnival said that there will be more additions this year. One of them will be “Dreamland” and “Insomniac” that is imported from Europe and that will give people thrill rides.

“We have great stuff coming up and we will have great weather during the fair,” Oakley said.