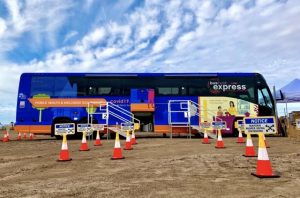 While recent attention has been directed at elected officials who have “jumped” the vaccine line, a local group says there are reasons to be concerned about disparities at the county level in vaccine distribution in the weeks to come.

In a statement released by the Imperial Valley Equity and Justice, they argue that in the five weeks since Imperial County launched its mobile COVID-19 testing bus, Calexico, the county’s second-largest and hardest-hit city, has received only 4 days of testing, in contrast to 10 days in Brawley (which has a permanent OptumServe testing site) and 12 days in El Centro.

“This evidence of discrimination and inequity in testing availability raises concern about the fair distribution of COVID-19 vaccines across the county,” the press release read.

When the mobile testing site was launched on December 9, 2020, replacing the second OptumServe site that had alternated between Imperial and Calexico, the goal was to make testing more flexible and tailored to need. While county residents may seek testing in local clinics, the county testing sites are the most accessible option for testing, as they are free, quick, and welcome walk-in testing.

In terms of total cases, Calexico leads the county in infections and deaths, yet has been given less than half the number of mobile testing dates as Brawley. In terms of active cases, the county’s three largest cities are nearly the same currently, 344, 457, and 345. One would expect that given trends, Calexico’s testing allocation would be higher, or at least equal, to that of El Centro and Brawley. It is, however, one-third of El Centro, and less than half of Brawley.

Given this record of testing, there is reason to be concerned that the rollout of the COVID-19 vaccine will be similarly unequal. With the recent State directive that testing begins for adults 65 and older, El Centro Regional Medical Center and Pioneers Memorial Hospital have announced limited vaccine drives. So far, no plans for vaccinations in Calexico have been announced. Given the lack of a hospital or urgent care center in the county’s second-largest city, targeted plans for vaccine accessibility are required on the part of the Imperial County Public Health Department.

“With only a few primary care doctors for this hard-hit area, the county’s public health department should be in close communication and coordination with providers to get vaccines to all corners of the county as we go through the tiered system,” says Blanca Morales, CEO of the Calexico Wellness Center; “Even that will not be enough, in places without hospitals, like Calexico, we need mass vaccination sites. The mobile unit is a great idea if it was equitable.”

The disproportionately low level of testing in Calexico, a city of similar size to El Centro and Brawley, also falls short of the California Public Health Department’s directive that counties target resources (in testing and tracing) in hardest-hit census tracts. Over the summer, the state announced its “Health Equity Metric” which measured COVID-19 positivity rates in the most disadvantaged neighborhoods, as designated by the ​Healthy Places Index​. In Imperial County, these neighborhoods include most of Calexico, east El Centro, east Brawley, all of Holtville, and downtown Heber. When the Health Equity Metric is higher than the county positivity rate, it means that COVID-19 spread is concentrated in disadvantaged neighborhoods. Currently, the Health Equity Metric of 20.6% (compared to a countywide 18.1% positivity rate) suggests that cases are concentrated in disadvantaged neighborhoods. The county has not followed the state’s directive to concentrate testing availability in the hardest-hit communities, the group argued.

“Imperial County Public and Environmental Health Departments are more than “PR” firms,” says Calexico Councilmember Raul Urena. “Real decisions on how vulnerable communities are reached with information and resources are made there. Calexico will not be left behind only because there is a lack of representation in County leadership. We insist on a bilingual, contextualized approach for our community.”

If the recent record of inequities in testing is any indication, Calexico may be at the back of the line, the press release read.

Imperial County Department of Public Health Director Jeanette Angulo said in a response to Beyond Borders Gazette that they appreciate all the individuals and entities that are concerned about our community’s equity and access issues in relation to testing of individuals for COVID-19 and vaccine distribution. Angulo said that since the start of the pandemic, County staff has been working closely with partner agencies at the local, state and federal levels to assure that the response to the pandemic has been effective, timely and equitable.

In regard to the availability of testing, the original plan to roll out COVID-19 testing was to open up one testing site and move it around to different areas in the community in an effort to make it accessible to multiple areas in the County.

The original testing site started in Imperial, then moved to the Calexico Recreation Center and then to Brawley. Following the allocation of additional testing resources, a new location was established at the Calexico Senior Center for about a month. Testing numbers stayed low in Calexico. While testing capacity was 132 per day, the location averaged 25-50 tests per day, well below the State’s required 85% utilization rate.

“Due to the low number of tests being completed at the Calexico testing site, the testing resource was relinquished back to the State. The decision at that point was to keep the single remaining testing site in Brawley due to limited testing resources in the northern part of the county, at the time,” Angulo said.

On December 9th, 2020, the State’s Testing Task Force authorized the deployment of a Mobile Testing bus and traveling team to Imperial County. These two new testing resources provide more targeted and flexible testing opportunities for Imperial County residents. The mobile bus and traveling team have the capacity to test up to 528 and 165 individuals per day, respectively. The Mobile Bus is scheduled for SDSU Imperial Valley Campus this Friday, Jan 22nd, and county staff is planning on having two vaccination events in Calexico the week of Jan. 25th. Staff was in communication with Mr. Tomas Virgen and Raul Ureña on January 11th in an effort to identify additional testing sites in Calexico. Staff will continue to work with community partners on expanding testing opportunities for all Imperial County residents, Angulo added.

“Regarding vaccine allocation, it is necessary to clarify that the COVID vaccination program is run by the State of California and the State determines the Tiers as well as the allocation amounts for each County. Of course, county staff is involved in advocating for our community and requesting additional resources when the opportunity arises. As has been shared at the weekly Board of Supervisors meetings, a local vaccine planning group has been meeting regularly to assure that vaccine is distributed in an equitable manner. This group includes participation from partner agencies including the two local hospitals, the Medical Society, Indian Health Services, Emergency Medical Services, Clinicas De Salud Del Pueblo, and public health staff. In addition, a Vaccine Communications Workgroup includes participations from Comite Civico del Valle, Imperial County Social Services, Imperial Valley Taskforce, Imperial Valley Joint Chambers of Commerce, Area Agency on Aging and Imperial County Office of Education,” Angulo said.

Angulo added during an emergency and crisis situation, providing accurate information for our community is especially necessary for the public’s health and safety. For this reason, she said, the staff has made every effort to share accurate and timely information and conduct the public’s work in a transparent manner. The Imperial County Public Health Department offers Joint News Conferences on a weekly basis in partnership with our two hospitals and County CEO to share updates with our media partners and the events are posted on social media for the community to view. In addition, the Department offers bi-weekly community updates in English and Spanish to share information with community members. These events are also posted for public viewing, Angulo said.

“The pandemic has impacted all levels of our society and the challenges that are being experienced are not unique to our community. However, what is unique about our county is the unwavering commitment by county staff to serve our community and the ability of our local entities to come together to work cohesively to provide the highest level of service to our public. Our residents deserve nothing less. As we continue to roll out COVID-19 vaccination, we ask for our community’s patience for the situation and guidelines are constantly changing and we at times need to pivot on a moment’s notice in order to follow new guidelines,” Angulo stated.