Local Democrats Gather for First Networking Event of the Year 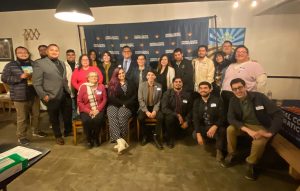 It was an excellent networking mixer for local democrats from all over the valley to meet and talk about the issues that affect the residents. It was also an opportunity to create a united front to collaborate for future elections.

“We have new faces on the committee and we will be having more events like this one. To the candidates who won, we will be your backbone and we are here to support you. This feels like one big family reunion,” said Roxsanna Pacheco, Chairperson of the Imperial County Democratic Central Committee.

The Democrats endorsed several candidates for office in the 2022 election. Among the winners present were Sonia Carter, Michael Luellen, Gloria Brambila, and Gilberto Manzanarez.

“Being part of the democrat committee and meeting these fighters eager to serve their community gave me another boost of what I wanted to do to help other people,” El Centro City Council member Sonia Carter said.

Statements from Congressman Raul Ruiz and Assemblymember Eduardo Garcia were read that supported the efforts of the local Democratic Party.

The Imperial County Democratic Central Committee consists of 21 regular members as set by state law. They are elected or appointed for each of the five supervisorial districts of Imperial County.