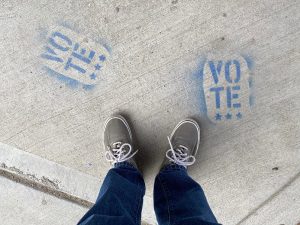 Time is running out and every vote counts. The 2022 election in the Imperial Valley is in full swing as the nomination period is over and the candidates have filed and are officially in the race.

The filing to run for the various countywide positions ended March 16. The incumbents showed their desire to keep their position and new challengers surprised everyone by appearing on the ballot for the first time.

For the Imperial County District Attorney position, you have George Marquez, Jason Amavisca, Edgard Garcia, and Mario Vela. They are vying to replace Gilbert Otero who has been the District Attorney for nearly three decades.

The candidates have gone to the community to meet people at local events to meet the voters and rack up endorsements from local unions and prominent politicians.

Candidate Jason Amavisca has a successful event at the Women’s Improvement Club in Calexico on March 18 where local business leaders, elected officials, and community members met the candidate.

Amavisca started his speech honoring women and paid tribute to the first female attorney in California. He gave a speech about his platform which was received very well by the audience. During the dinner, Amavisca was able to speak with the attendees who asked questions and learn more about him.

In the event, he received the endorsement of former Calexico Mayor John Moreno.

“I’m proudly endorsing Jason Amavisca for Imperial County District Attorney. He is an honest man, he’s had experience both as a district attorney and in private practice. So you can’t go wrong with Jason,” Moreno said.

“He’s a thoughtful, intelligent individual and I think he will do an outstanding job. I’m glad he is running to represent the people,” Carrillo said.

“I know he will do the work victims need to be represented and receive the services they are due and help them get through and navigate the justice system,” she said.