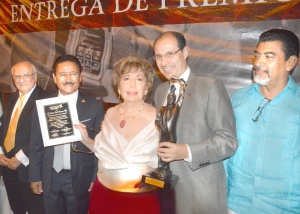 Ensenada, Baja California.- The leadership of the Federation of Mexican Journalists Association (FAPERMEX) period concluded, electing M.A. in journalism Maria Consuelo Eguía Tonello, better known as Colila Eguia, as its president for the period of 2016-2019, relieving the Bachelor Raul Teodoro Rentería Villa in the period 2013-2016.

The National Assembly unanimously agreed to reward B.A. Teodoro Raul after his period, being named Honorary President for Life along with other former presidents of the steering group of the national organization.

It should be noted that during Teodoro Rentería presidency period many goals have been achieved as strengthening the union unit itself and the founding of the National Association of Graduates in Journalism, being the first created in the history of the country, thorough obtaining Journalism Degrees in Recognition of knowledge acquired.

The new president Colila Eguia, who was part of the first generation enrolled in the Bachelor of Journalism through a virtual classroom, was unanimously elected after  presenting her plan, exposing 8 points related to the most important and substantive efforts to preserve unity regarding creating FAPERMEX.

One of the highlights are the cases of victims of killings, enforced disappearances, persecutions and threats from powers and authorities of different levels of government, trying to guarantee freedom of speech, press and thought to all journalists in order to advance with the demand so that in all States of the Republic ‘defamation and slander’ remain repealed codes in Criminal Procedures and Criminal codes, since Mexico was identified as one of the most dangerous countries to practice journalism.