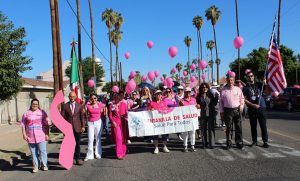 The annual Lazo Rosa Binational walk was once again held on the Calexico-Mexicali border showing that the fight against cancer can unite two countries for a cause. This event was a step in the right direction to raise breast cancer awareness in the community.

The event was done in conjunction with the organization Mujeres Que Viven which also walked on the Mexicali side and met the Calexico group at the border fence.

About 80 participants marched down Heber Avenue starting at the Mexican Consulate proudly showing with pink shirts, balloons, and banners that couldn’t be ignored.

Organized in collaboration between Ventanilla De Salud, the Mexican Consulate, and other health agencies, the event also aimed to encourage women to get prevention screenings or exams.

Breast Cancer Awareness Month is an annual observance held in October. It is intended to raise awareness about breast cancer, the second most common cancer among women in the United States.

About 1 in 8 U.S. women and 1 in 833 U.S. men will develop invasive breast cancer throughout their lives.

As of 2020, there were 2.26 million global cases of breast cancer, making it the most commonly diagnosed cancer in the world. 685,000 of those diagnosed have died.