THE BRAIN OF THE LEADER 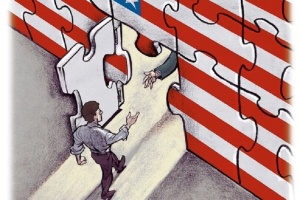 Washington, DC – Entrepreneurs, startup companies, and the National Venture Capital Association (NVCA) filed a lawsuit in federal court today challenging the Department of Homeland Security’s (DHS) delay of the International Entrepreneur Rule (IER). Finalized by the Obama administration, the rule would have allowed talented foreign-born entrepreneurs to travel to or stay in the United States to grow their companies for two and a half years with the possible extension of another two and a half years. The plaintiffs are represented by the American Immigration Council (Council) and Mayer Brown LLP.

Less than a week before the IER was to go into effect on July 17, DHS announced that the rule would be delayed and that the agency would be proposing to rescind the final rule. Because DHS did not solicit advance comment from the public on the delay, it violated clear requirements of the Administrative Procedure Act. As a result of the suspension of the IER, immigrant entrepreneurs that intended to use the rule have been and will be harmed. The U.S. economy will miss new businesses and jobs that would have been created but that unfortunately will now be created overseas. To remedy this unlawful action, the plaintiffs are asking the court to compel DHS to implement the IER, and begin processing applications of foreign-born entrepreneurs so that they can come to the United States on a temporary basis to grow their businesses.

“Immigrant entrepreneurs play a vital role in strengthening the U.S. economy, creating new jobs for Americans, and pushing the boundaries of innovation. Rather than throw up roadblocks that prevent them from bringing their talent and ingenuity to our shores, we should welcome them with open arms,” said Bobby Franklin, President and CEO of NVCA. “A global race is underway to attract and retain talented entrepreneurs and we should be doing all we can to win. If we want to maintain our foothold as the global leader in innovation, the International Entrepreneur Rule must be allowed to proceed and we are committed to standing shoulder to shoulder with entrepreneurs and startups to seeing that through.”

The U.S. economy has long thrived on the contributions and innovations of immigrant entrepreneurs. From Google and Intel to Zipcar and Tesla Motors, some of the most iconic American companies that were once venture-backed have at least one immigrant founder. A 2013 NVCA study determined that a full one-third of U.S. venture-backed companies that went public between 2006 and 2012 had at least one immigrant founder. Furthermore, a 2016 study by the National Foundation for American Policy found that immigrants have started more than half (44 of 87) of America’s startup companies valued at $1 billion or more.

“The United States economy as a whole thrives because this country has long been regarded as the world’s leading incubator of new, innovative companies,” said Melissa Crow, Litigation Director of the American Immigration Council. “The International Entrepreneur Rule is essential to ensuring that America remains at the forefront of emerging enterprise. Our lawsuit is intended to get this important initiative back on track.”

Despite their significant contributions to our economy, immigrant entrepreneurs often encounter significant barriers to obtaining permission to travel to and work in the United States. This is not the case in other countries who are adapting their immigration policies to grow their ecosystems.  Canada, France, Singapore, and the United Kingdom are a few examples of countries that have created dedicated visa programs to attract entrepreneurial job creators. This shift in policy is having a direct impact on venture investment activity globally with the United States losing its share of global venture capital investment. Two decades ago, U.S. startups received more than 90 percent of global venture capital investment. That number fell to 81 percent a decade ago and fell further to 54 percent last year.

“The International Entrepreneur Rule is designed to facilitate immigration of the world’s leading entrepreneurs, ensuring that they build their companies in America, employ American workers, and contribute to the American economy,” added Paul Hughes, a Mayer Brown partner. “Suspension of the International Entrepreneur Rule will perversely incentivize the world’s foremost visionaries to found their companies outside the United States.”

To learn more about the International Entrepreneur Rule, see: Capitalizing on the Economic Potential of Foreign Entrepreneurs