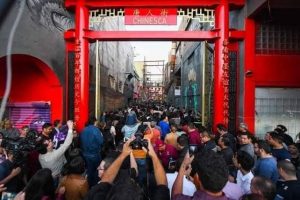 The Governor of the State, Marina del Pilar Avila Olmeda, highlighted the advances in the renovation of the Historic Center of the city of Mexicali, achieved through coordination between society, the Mexicali City Council, and the State Government, as well as the support of the entrepreneurs of the area, whose objective is to make “La Chinesca” and the first section of downtown as a benchmark for national tourism.

This will be an attraction to both national and foreign tourists that will trigger the economic development of the first square with a site of free access to the entire population.

“The historic areas are for us, for this Government, a benchmark of where we come from, where we were born, from the cities from which all of us Baja Californians come, and what better way to undertake, as we have already done from Mexicali, the capital of Baja California, to return this important meaning to it,” the Governor said.

The Governor expressed that after decades of abandonment, the Historic Center of Mexicali is “alive and beating with magic and that heart today beats more than ever”, due to the efforts of programs that have believed in the present and future of the said area that concentrates a large part of Mexicali.

In this sense, she thanked the support of the Mayor of Mexicali, Norma Bustamante Martínez, who joined the project since she was Director of the Municipal Institute of Art and Culture of Mexicali (IMACUM), achieving results that today are palpable in benefit of the economic, cultural and social development of that sector of the capital of Baja California.

Likewise, she pointed out that one of the emblematic areas of the Historic Center of Mexicali, “La Chinesca”, will soon become a national tourist destination, which is representative of the diversity that makes up the identity of those who live in Baja California.

“It is an example of what we can do when the different orders of government, civil society, private initiative come together. The Historic Center is a great example of what can be achieved when we put The Heart Ahead”, said Marina del Pilar Avila Olmeda.

The meeting addressed issues such as the development of cultural activities for 2022, the infrastructure projects that make up the rehabilitation of the first square, as well as coordination with the businessmen of said space to facilitate progress in the project and the actions to be developed in public services and public safety.

The meeting was attended by Carlos Torres Torres, honorary coordinator of projects for the recovery of parks and historic centers of the State Government;  Alfredo Álvarez Cárdenas, General Coordinator of the Cabinet;  Arturo Espinoza Jaramillo, Secretary of Infrastructure;  Miguel Aguiñiga Rodríguez, Secretary of Tourism, in addition to Pablo Chee, representative of the Chinese community of Mexicali and the XXIV Mexicali City Council, as well as representatives of the areas of promotion, transportation, sports, culture, security, works, tourism, and communication from both the state government and the Mexicali City Council.