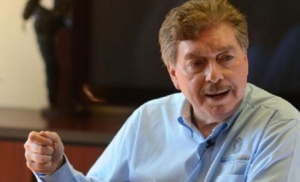 MEXICALI, B.C.- The Governor of the State of Baja California, Francisco Vega de Lamadrid, confirmed yesterday that he will interpose a constitutional controversy to the reform approved by the state assembly and by three city councils, which validated the extension from two to five years for the coming state governorship.

The state governor said that, in accordance with the law, this legal action will be filed at the corresponding procedural moment, which is, the reform that violates the rule of law and the will of the people who voted on June 2 for a governor with a term of two years.

The constitutional controversy is the second specific action that Governor Kiko Vega has determined to file to reverse the legislative decision and thereby remain attached to the defense of the rule of law and citizens’ will.

The Governor reiterated that he remains firm in his decision to not publish the reform once it is requested by the State Assembly and after this notification, the appeal of the constitutional controversy could be conducted or filed.

“My commitment is to the citizens, so I will always ensure that the rule of law in Baja California is respected,” concluded Governor Vega de Lamadrid.