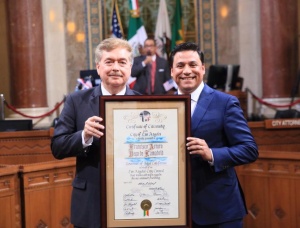 LOS ANGELES, CALIFORNIA – The State Governor, Francisco “Kiko” Vega de Lamadrid, established the importance of continuing to work in a coordinated fashion at the “First Meeting with Migrant Houses” of the National Conference of Governors (CONAGO). Policies implemented jointly such as sanitation in the discharge of water, the impulse in the use of clean energy and where he pointed out that the Government of the State of Baja California has fulfilled its commitment to help improve the environment through specific public policies such as vehicle verification, implementation of green power plants, among others.

During this important meeting, Governor Kiko Vega highlighted the binational work that has been carried out and where authorities of the neighboring State of California attended, among them were Edmund G. Brown, Governor of California, the Council of Los Angeles and the Senator Kevin de León, and where the Mexican Government was present, the Undersecretary for North America, Carlos Manuel Sada, General Consul of Mexico in Los Angeles, Carlos Garcia de Alba and the Governors of 7 states: Sonora, Durango, Guanajuato , Morelos, Oaxaca, Mexico City and Baja California.

On the other hand, he highlighted the importance of the relationship between the two neighboring states, pointing out the 75 million border crossings between California and Baja California last year, being the busiest border in the world, as well as tourism in the State where 58% of visitors are foreigners and 96% of them are Americans, likewise, highlighted the commercial relationship that as neighboring states historically have and the support that both states have shared.

Governor Brown emphasized that California’s policies will be independent of the discretionary policies that apply from Washington, favoring dialogue and respect for human rights of those who emigrate to the neighboring country.

The California Governor recognized the importance of Mexico as a business partner and the people who mainly live in California, who contribute to the construction and growth of that state and the country in general. He also stated that he has generated public policies aimed at supporting the welfare and respect of migrants, concluding that the construction of a border wall cannot stop the flow of migrants, assuming that the binational relationship must remain solid and stronger than ever.