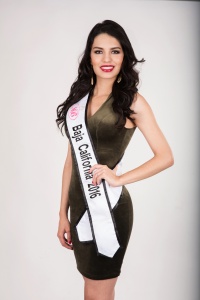 Having been placed second in the state competition, it remained the favorite throughout the state, so the 24-year-old Cachanilla, bacherlor’s in education, was appointed representative of Miss Baja California Beauty by the National Committee of Miss Mexico.

“It was a merit and a feat because 11 years ago this type of designation did not happen in Baja California, where instead of 1 representative there are 2, and it is not something that happens very often in some other states,” said Kenya.

Her first contest which brought her to the world of fashion and modeling was at Fiestas del Sol Mexicali in 2011, where she became the bearer of the crown in the city’s festivities. When she won she realized that if she wanted to, in the same way she had done it locally, she could represent her state, Baja Califonia. So she decided to pursue the state crown with the illusion of following in the footsteps of her predecessor, Lupita Jones, and becoming the bearer of the Crown of Mexico and then go after the great title of Miss Universe.

The 5.60ft tall and 120lbs young girl, considers that beauty is very subjective, so the most important thing in a contest is not so much physical beauty, but rather what is projected to the exterior, personality.

She is grateful but also feels that this designation was also a reward to perseverance, because she participated for two continuous years and she almost made it, being about to win the crown, when this type of failure discourages many aspirants and they end up giving up, however, on the contrary, she prepared and arrived with encouragement, so the designation was took by her as a reward for perseverance.

The Cachanilla, Kenya, has already been preparing for a couple of months, as well as her 43 contestants in the national contest, to be held on March 12, 2017 in Mexico City. Within this preparation she has been participating as a guest presenter in the Televisa Mexicali show: “Hola Mexicali” which is broadcast every morning from Monday to Friday from 8:00 AM to 10:30 AM on Channel 3.

She aspires to achieve her dream in order to be a model of inspiration for other local contestants.