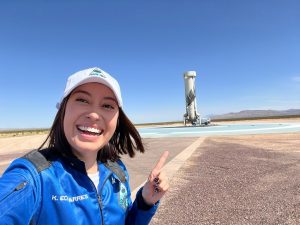 Katya Echazarreta, 26, made history when she became the first Mexican-born woman to travel to space. Born in Guadalajara, Mexico, Echazarreta, who moved to the United States at the age of seven, has been selected from a pool of 7,000 applicants by nonprofit organization Space Humanity to participate in “Blue Origin,” the space mission funded by billionaire Jeff Bezos.

Her roots started in Mexico where she was born. Her family moved to the US when she was 7 years old. Growing up in the US was difficult at first due to the language barrier, but she worked hard and was a fluent English speaker within two years.

“My mom instilled a strong work ethic in me since childhood and always encouraged me to follow my passions. Space, Math, Astronomy, and Physics have interested me for as long as I can remember and I never lost sight of that growing up,” she stated.

Eventually, Echazarreta transitioned to a full-time engineer and worked on 5 NASA missions including Perseverance and Europa Clipper.

“Throughout my journey in engineering school, I was very aware of the lack of women in the field. This was very difficult for me because I did not have many people I could ask for advice regarding several topics such as the challenges we face on a daily basis,” Echazarreta stated. “I’ve been given the opportunity to help guide those girls and women who, like me, are looking for someone with experience in what they are going through. Through honesty about the difficulties and encouragement, I hope to be able to help women be better prepared for their experience as a woman in STEM.”

“It was an honor to fly this special crew of explorers and true pioneers today,” said Phil Joyce, Senior Vice President, New Shepard. “Thank you to the entire New Shepard team for your tireless work and dedication to this program. Each mission is an opportunity to provide another six people with the life-changing experience of witnessing the beauty and fragility of our planet from space. It’s one step in realizing our vision of millions of people living and working in space for the benefit of Earth.”