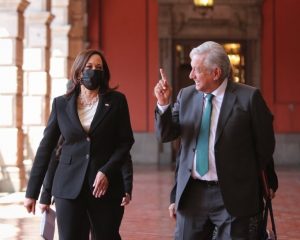 Vice President Harris met with Mexican President Andrés Manuel López Obrador to discuss ways to deepen cooperation between the United States and Mexico to address the root causes of flight from Guatemala, Honduras, and El Salvador, including promoting economic development in southern Mexico and the Northern Triangle of Central America. They underscored the important partnership between the two countries and recognized the need to work together to recover from the COVID-19 pandemic, build climate resilience and expand economic opportunity and security cooperation.

The leaders agreed to work together to establish a strategic partnership to address the root causes of migration from countries in the Northern Triangle region.  Through this joint initiative, the United States and Mexico will leverage their expertise and resources to tackle a range of challenges, including lack of employment, limited market access, and deforestation, and regional instability caused by climate change.

Vice President Harris noted the U.S. commitment to working with Mexico to spur economic development in the Northern Triangle and southern Mexico, to protect the rights of workers to organize or join a union and expand opportunities for U.S. business collaboration. To that end, the United States has developed a package of measures that include trade and business development missions to the region facilitated by the Department of Commerce and the United States Trade & Development Agency and investments through the U.S. International Development Finance Corporation. This package follows on previous investment in the region and is emblematic of the partnership with Mexico, and is yet another step of many to come in this arena.

The governments discussed their desire to advance a bilateral effort against migrant smuggling and human trafficking that will bring together law enforcement from both nations to dismantle criminal networks.  As part of this effort, the United States and Mexico will share information and expertise to jointly secure our borders and bolster the protection of human rights.

After her meeting with Mexican President López Obrador, the administration announced a range of agreements brokered between the two governments, including a $130 million commitment over the next three years from the U.S. to support labor reforms in Mexico and loans to bolster southern Mexico’s economy.

The administration said the meeting produced an agreement to have an economic dialogue in September on trade, telecommunications, and supply chains. And the two countries will also partner on human trafficking and economic programs addressing why people leave El Salvador, Guatemala, and Honduras for the U.S.