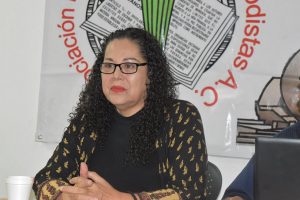 A Journalist was killed on Sunday in Tijuana, marking the third killing of a journalist in the country in two weeks.

The journalism industry in Mexico is shocked and heartbroken by the news of the assassination of Lourdes Maldonado on Jan. 23rd. This was only one week after the murder of photojournalist, Margarito Martinez who was gunned down outside his home. He was well-known for covering the crime scene in Tijuana.

According to Associated Press, Maldonado was found shot to death inside a car on Sunday, according to a statement from the Baja California state prosecutor’s office. Authorities had received a 911 call around 7 p.m. and found Maldonado dead on arrival.

In 2019, Maldonado came to López Obrador’s daily morning news conference and asked for his help “because I fear for my life.”

Maldonado had been registered in the state’s protection program for journalists.

From 2000 to 2021, human rights group Article 19 has registered 145 killings of journalists in Mexico, with seven deaths last year.

Maldonado had announced that she won her dispute with the media company Bonilla owned after nine years of litigation.

In response to this tragedy, Baja California Governor Marina Del Pilar announced a Special Prosecutor to investigate the killing of the two journalists.

“I reiterate my support and solidarity in the face of these events; this is a joint effort for the peace of Baja California and its people. We are going to work in a coordinated manner at the 3 levels of government to guarantee the safety of journalists, as well as of our society,” the governor stated on Twitter.