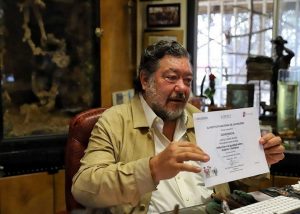 As a result of the resolution issued on July 7 by the Superior Chamber of the Electoral Tribunal of the Federal Judicial Power (TEPJF) that confirmed the order of the Electoral Tribunal of the State of Baja California, Jorge Hank Rhon offered a public apology to women for the remarks made in January was deemed as political violence based on gender.

In addition to this order, Hank Rhon took a four-hour online course called Introduction to equality between women and men, which issued a certificate endorsed by the National Institute of Women, signed by its owner, Dr. Nadine Flora Gasman Zylbermann.

During the conference, Hank Rhon stated that he never intended to offend anyone, especially women for whom he reiterated his respect, admiration, and deep affection.

“I am sorry that a comment from me has been misrepresented to the point of causing a sanction, however; I fully comply with the authority’s mandate and I offer the deepest apology to all women, with the certainty that I have never done or said anything to offend them”, said the businessman.

Asked about what this sanction leaves him, Hank Rhon said this was the second gender course he attends, which allows him to learn more about everything that the struggle of women in their search for respect and equality implies.

Likewise, he explained that the dynamics of the course are friendly and that it allows strengthening each of the concepts exposed there, same that for many years have been applied in his companies, which are currently certified as “Safe place for women.”

Finally, he said that each new learning is an opportunity for growth, which is why he was pleased to participate in the course, he said: “It allowed me to know concepts, language, and expressions that currently we should not pour because they are classified as violence or aggression towards women”.