Joint actions to face the return of migrants 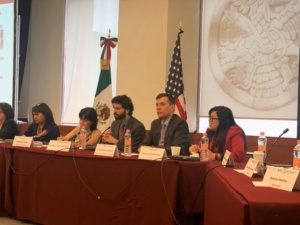 – Orientation to parents about the national education system, needs

– Generate a Public Policy according to current needs, commitment

“There are several challenges that we must face because of the increase in the demand of children and young people entering the Mexican education system, such as availability of educational spaces, training of personnel to promote good cultural integration and the provision of adequate teaching materials,” said the SEP official.

Elia Dimayuga-Bruggeman, superintendent of Public Schools in Boston, warned about the situation of the US-Mexico binational education: “On the one hand, migrant Mexicans are the group that with the highest dropout rate in the United States. In turn, returning students are vulnerable in Mexican schools. Both countries, Mexico and the United States, must work collaboratively.”

With the objective of consolidating collaboration schemes between the instances of binational and bilingual education, implementing programs for access to schools, insertion into the education system and revalidation of studies for the population in a situation of return, the Mexico-United States Binational Migrant Education Forum was held for the first time in Mexico City.

Coordinated by the Institute of Mexicans Abroad (IME) at the Secretary of Foreign Affairs (SRE), in collaboration with the SEP, the National Institute for Adult Education (INEA) and the Binational Migrant Education Program (PROBEM), strategic issues were addressed for compliance of the Migrant Protection Strategy, signed by both countries in early 2019.

As a result of the working groups, the main needs identified among the population: Guarantee to the migrant population their right to education, guidance to parents on the educational system in both countries and on the mechanism of integration thereto; promote the revalidation of education at all levels and avoid the loss of cultural identity.

Some of the commitments made were generating a Public Policy according to the current demands of Mexicans abroad and the population in return; promote dissemination strategies for educational services; work on a scheme of scholarships and educational alliances between both countries; teacher-training for the integration of children and young people into the national education system, among others.

The work carried out in this Forum which took place in the facilities of the Secretary of Foreign Affairs’ headquarters in Mexico City denotes the interest and commitment of both countries to contribute to the healthy development of the Mexican community abroad, their insertion into the country and the possibility of participating in the development of Mexico.